Japanese Umeki Mami won the world title for Japan for women U78kg. An absolute sensation at a sensational day. Umeki also became the youngest winner of the tournament so far with just 20 years of age. The last final of the day opposed Umeki Slovenian Ana Velensek. Would Velensek be able to imitate her teammate Tina Trstenjak from the U63kg weight category or was Japan able to win a fifth gold medal this event. Umeki gave the answer to that question.

The Slovenian seemed to take the lead during the first half of the fight even if nothing was written on the scoreboard. Both athletes then spent a long sequence on the floor, but Velensek’s defense was impenetrable. After four even minutes, it was time for the golden score. The second sequence on the floor was the undoing of the Slovenian. With this victory in -78kg, Japan enters one more time into the legend of judo as the home country of judo has now won a world title in every possible weight category, as the women’s -78kg was the last category never won by an athlete from the country of the rising sun.

In the first bronze medal fight, Germany’s Luise Malzahn totally upset French Audrey Tcheumeo The French engaged a right handed-o-soto-gari but without control and without putting the German out of balance. The punishment was immediate as Malzahn counterattacked with o-soto-otoshi for waza-ari, immediately followed with an immobilisation for ippon.

The second place on the podium was decided between Marhinde Verkerk and Daria Pogorzelec (POL). The Polish was penalised once, giving the victory to Verkerk and the very first medal of the Dutch delegation.

World champion and Olympic champion Kayla Harrison (USA), who won the World Masters in Rabat in May, could not advance beyond the second round as she was blocked by Hyunji Yoon (KOR) who threw Harrison with an unstoppable counterattack during the Golden Score. The road of the semifinals cleared of the American allowed outsiders to take their chance. Thus Pogorzelec Daria (POL) eventually qualified to face Umeki Mami who had settled her account as the top seed in the pool B to Luise Malzahn (GER). It is noteworthy to say that during the first rounds, Pogorzelec had beaten the current world champion, Mayra Aguiar (BRA). Umeki secured a place in the final with an immobilisation for ippon.

After a difficult start, Audrey Tcheumeo (FRA) managed to recover to also reach the semifinal and meet Polish Pogorzelec on her way to a new title. It must be said that despite extraordinary power, the French appeared very timid during her first fight against Yalennis Castillo. After this winded beginning, Tcheumeo ventured to eliminate Joo Abigel (HUN) by ippon and Marhinde Verkerk by waza-ari.

In Pool C, unsurprisingly, was the top seed Velensek who qualified for the semis, In the quarterfinal, she prevailed against the Olympic silver medallist, Gemma Gibbons with two penalties against one, Velensek stepped into the final but lost to Mami Umeki who regained the title for Japan after an absence since 2005 on the podium.

Noriko Anno was the best heavyweight U72kg and U78kg. She won four world titles, starting in 1997 U72kg in Paris. Maki Umeki is the second Japanese to win this category. A very world wide spread of world champions. 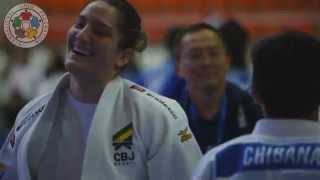