What an amazing performance of Anna Maria Wagner of Germany who became the second ever female World Champion. She was a class act today in pure form, hopefully not too easy because this was Olympic level with top level opponents that she can face at the Olympic Games. She never cracked and took full advantage and control of that super shape she is in.

Madeleine Malonga of France was the defending champion started too slow in the match against Wagner. Wagner was in full control and had four attacks in the beginning and delivered the French the first penalty. The powerful Malonga came back in the match though but continuously Wagner kept attacking and kept in the match.

Malonga burned some energy in his first matches especially against Karla Prodan but came in her rythm. Also Wagner showed a strong pace in this tournament. Against the Mongolian Erdenet-Od Batbayar Wagner was able to prevail in the first fight confidently after almost 43 seconds of fighting time. After victories against the Russian Antonina Shmeleva and Marhinde Verkerk from the Netherlands, the fifth in the world rankings awaited in the semifinals with the Japanese Mami Umeki.

Mami Umeki was good, especially in newaza and her tachi-waza and had a tough opponent in Luise Malzahn who was still fighting for her last chance for Tokyo with a strong physical presence. Umeki didn’t give in but lost against the second German Wagner in the semi final. The duel was even for a long time and it became clear that the first mistake would be penalized. In the end, Wagner prevailed with a waza-ari in that tight match. Wagner had it all including some real efficient and hard committed attacks.

Not at all impressed by the pedigree of her prestigious opponent Madeleine Malonga, Anna-Maria Wagner was the first to action with ample o-uchi-gari attacks, that always came before Malonga could do anything. The French judoka was penalised a first time for passivity. During the next sequence she imposed her kumi-kata and it was Wagner's turn to be penalised. The tactic of the German athlete started to become very clear: a strong right arm over the head to block the attacks and pushing for o-uchi-gari. Malonga was penalised a second time. In the last seconds of normal time, the world champion seemed to regain some control but not enough to score. Golden score! After a few unsuccessful attacks, it was eventually Wagner who scored with an aerial uchi-mata. Malonga's first match was a signal. She was not exactly on top of her form. In that final freshness, accuracy and determination were on the German’s side. This is a first world championship gold medal for Anna Maria Wagner, who from now on will wear the red back number. This is not the result that was expected in the morning, but a beautiful result indeed.

In tears, Anna Maria Wagner said, "For me it was just a tournament to prepare the Games, but now I realise I’m world champion, so it is not just any event. And I won showing my best judo."

Guusje Steenhuis couldn’t reist Malonga in a convincing semi final for the French and Steenhuis fought against Marhinde Verkerk in her last career match at her last event, but Verkerk couldn’t beat Guusje Steenhuis who was in control fast with a wazari and finished it despite their reputation and 16 head2heads. Showing opportunism, Steenhuis scored a first waza-ari with a little but so effective o-uchi-gari. She could then control the score until the final gong. Beyond the result and the well deserved bronze medal for Guusje Steenhuis, there was a lot of emotion as Marhinde Verkerk, world champion in 2009, in Rotterdam, left the competition area for the last time of her career. She would have loved to do it with the medal, but it is her friend and teammate who won it. For sure, at the moment she kissed the tatami that offered her so much, her head must have been full of thoughts. We could feel it, we could see it and just for that, she deserves all the medals in the world. Last years where simply dominated by Steenhuis but she gave her all respect after the match and Verkerk thanked her teammates and was awarded on the podium after the medal ceremony for her outstanding career. She was the 2009 World Champion and competed at two Olympic Games but Steenhuis took over and this was a very precious goodbye with a statue of the IJF for her outstanding career.

Anastasiya Turchyn (UKR), who had a severe defeat against Malonga earlier in the day, remained focused and qualified for the bronze medal contest against Umeki Mami (JPN). Imposing her strong grip over Umeki’s head, Turchyn quickly forced her opponent to be penalised. Totally dominated, the Japanese athlete seemed a bit lost, incapable of taking control. Maybe Turchyn was over confident and moreover, Umeki did find just one opportunity, a single one, but this was enough to throw her opponent for waza-ari with soto-maki-komi and concluded with an immobilisation for ippon. This is the third world medal for the Japanese former world champion.

Maria Wagner wrote history for her country and there is more to come for the tall and young German that has a good outlook on a medal in Tokyo. 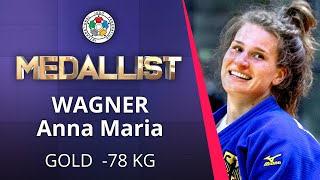 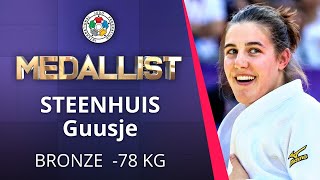 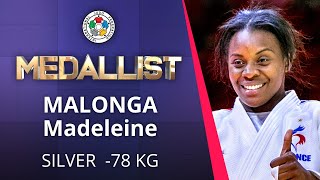