At the Judo Grand Slam in Tel Aviv France and Germany put the Franco-German friendship into brackets for a day. Each of the two semifinals presented a French and a German. The first to hit was Fanny Estelle Posvite (FRA).

The 28-year-old Posvite has reached her full maturity and for two years, with a couple of exceptions, has not stepped off the podium. Posvite overcame all the obstacles that came her way. In the semifinal, she eliminated Luise Malzahn (GER) and continued on her course, next against Anna Maria Wagner (GER), who had just defeated Posvite's compatriot and a silver medalist at the Rio Olympics, Audrey Tcheumeo (FRA). It was a tough fight that was close to breaking the foundations of the European Union. The German won in golden score by hansokumake.

Before the medal ceremony, the German cried and explained why, “They were not just tears of joy at having won. In Doha I was frustrated with my judo and I know that if I feel good I can beat anyone. Today I have shown it."

Malzahn and Tcheumeo also did not collect the remains, in the form of bronze medals, because they were defeated respectively by Karla Prodan (CRO) and Marhinde Verkerk (NED). Prodan was the only non-seeded player who caught a medal, well deserved and in great form. 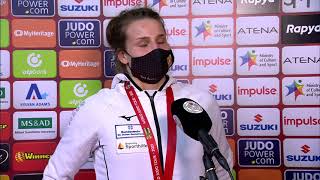 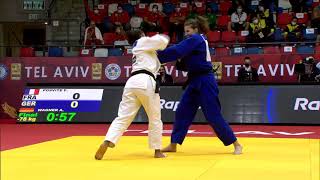 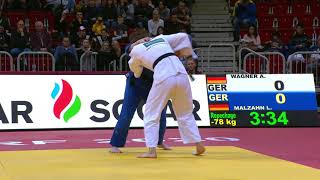