Agata ended her sports career at the age of 25, unofficially, to return to international competition again with a bang. Before the Olympics in Rio, she suffered a serious injury, which excluded her from the start. As it turned out, with determination and bravery, she made her Olympic dream come true in Tokyo, making her debut there as an experienced competitor. Now Agata is 33 tells her story to Mental Track. JudoInside summarises the highlights.

Ozdoba-Błach: “My adventure with judo began when I was 9 years old, in 1997. My brother, 2 years older, started training judo. A judo trainer came to school, recruited and I went to training.

Very late I decided that I want to do it professionally. I was in the Polish Team. I finished the European Junior Championships in 5th place, where the referees misinterpreted my fight and I lost my chance for a medal. Throughout this junior and youth period, I was 5th or 7th at the European Championships, but I never won a medal.

In 2012/2013, I went on Erasmus to France to study and after this exchange I stated that I had to go to work because I would not have anything to live on. I was 25 at the time and I decided that I was finishing my sports career. I worked in a corporation for six months, in the meantime I had to finish my studies and write a master's thesis in the field of International Relations. And then somehow "out of nowhere" I went to one training after 8 months of break from judo. During this training, I sprained my ankle, which turned out to be beneficial, because I had 10 days off from work, thanks to which I finished writing my thesis and defended myself. It was a bit of an unfortunate but happy accident.

The holidays came and I decided that I did not want to spend time in the office, because so far I was used to the July-August training camps. Then I decided to quit my job and return to judo. I returned to regular training, it was not easy, because I weighed much more than the limit of my weight class, so I had to lose weight and train intensively. I started in August, and in April there was the European Senior Championship. I had no qualifications then, I was going there with a wild card. To everyone's surprise, I won a bronze medal. And that's when the breakthrough took place, at the age of 26 my career, totally professional, began. It started with the medal of the European Championships, then the qualifications for the Olympics in Rio began.

I was very motivated to compete at the European Championships in 2014 and won a medal. Financially it was also a big risk to go back to the sport.

Around the age of 25 start is the age when many people are already working after graduation, have a structured professional life or start to make it. I didn't. I only knew that I could count on the help of my dad and my boyfriend at the time, and my current husband.

The prospect of competing at the Rio Olympics appeared and this goal motivated me a lot. I had a scholarship from the Ministry of Sport and training was provided. In the meantime, I continued my psychological studies. Then it all got a little more professional.

Unfortunately at the Military Games in Korea, during the fight with the Brazilian, I ripped my cruciate ligament. I returned to Poland and soon after returning to Poland, I had a ligament reconstruction surgery. I had the surgery in October 2015, the Olympics were held in July 2016, but my leg did not straighten and I had no chance of qualifying for the Olympic Games for Rio anymore.  I was in Rio as a sparring partner. I just accepted the situation. However thanks to this, I was able to see what the Olympics were like. Therefore, later in Tokyo there was no such great surprise and pressure. It gave me such a sense of security, I knew what it was like. Did it mobilize me? Yes, I knew that I wanted to fight for the next 4 years for the Olympics, and as it turned out later, even 5.

I trained while waiting for the Olympics. In March 2020, our tournaments were canceled, there was a period of uncertainty, lockdown. Then a few people organized a gym in the garage and a mat and just like before the Olympics in Rio, health problems reappeared before Tokyo. The postponed games turned out to better for me and I sealed the Olympic qualification with winning Grand Slam in Kazan.

When I was going to Tokyo, I was sure that I would win a medal. This was my goal. Unfortunately, that did not happen. In fact, I did not think about the fact that this is my debut and I am 33 years old.

Ozdoba debuted with a victory over medal candidate Miku Tashiro but lost to the surprise Maria Centracchio and in the repechage match against Anriquelis Barrios. 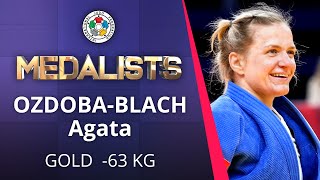 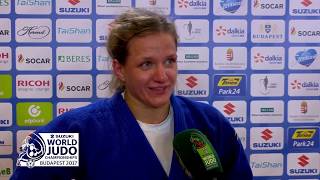 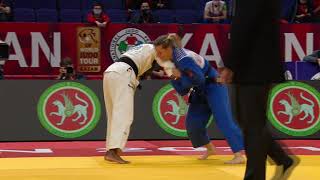