There are athletes that you are never really surprised to find in a final of a major event on the World Judo Tour. Among them, world number two Tina Trstenjak (SLO), World and Olympic Champion, is undoubtedly a perfect example of consistency and commitment.

Once again the young woman, seeded number one in the absence of Frenchwoman Clarisse Agbegnenou, her great rival, found herself in the final. In front of her, an acquaintance, her compatriot Andreja Leski, third in the last World Judo Masters in Doha. It was Trstenjak who controlled the pace of attack and in the end that was enough to secure the win and an incredible eighth grand slam gold.

In the first match for bronze, Agata Ozdoba-Blach (POL), whose last podium on the circuit dates back to the Budapest Grand Prix in 2018, was up against the Dutch judoka Sanne Vermeer, Junior World Champion in 2018. It was a Dutch victory and a first grand slam medal for Vermeer.

It was the second bronze medal match that the Israeli fans could start to rejoice for, as Gili Sharir (ISR) prepared to fight Magdalena Krssakova (AUT), winner of the Cancun Grand Prix in 2018, but their cheers were short-lived as the Austrian neutralised all attacks from the Israeli, leaving the final result to be decided by penalties and the home nation was left with disappointment. 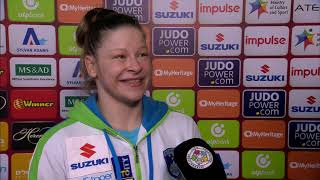 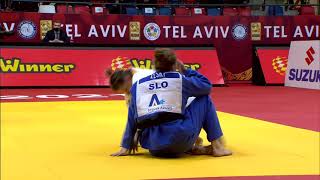 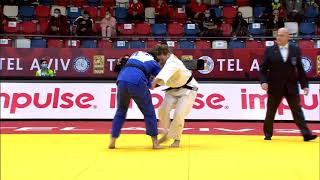