Trajdos had won their previous meeting back in 2015 at the Tokyo Grand Slam but failed to repeat that result today as world number 13 Nouchi threw with uchi-mata for a waza-ari score which settled the destination of the gold and silver medals after four minutes.

In the first semi-final Nouchi bested Düsseldorf Grand Slam winner Andreja Leski (SLO) by a waza-ari score in golden score after a four-minute stalemate. In the second semi-final world bronze medallist Agata Ozdoba-Blach (POL) lost out to Trajdos after the Polish judoka received her third and final penalty.

The first bronze medal contest was won by Ozdoba-Blach who threw The Hague Grand Prix bronze medallist Sanne Vermeer (NED) with an uchi-mata for a waza-ari score. Ozdoba-Blach now heads into the World Championships in September with high hopes of matching her medal-winning performance from 2017.

The second bronze medal was won by Leski who countered an osoto-gari attack from The Hague Grand Prix bronze medallist Stefanie Tremblay (CAN) to seal a place on the podium by ippon. Leski has the Olympic champion, Tina Trstenjak, for company in Slovenia at U63kg but keeps winning medals and is starting to make a name for herself on the international stage. 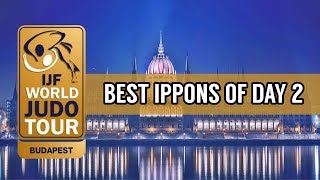