Clarisse Agbegnenou conquered reigning Olympic and world champion Tina Trstenjak of Slovenia to become a two-time world champion here in Budapest. The rematch of the Olympic final and the last Worlds final was hotly-anticipated as two most decorated judoka in the category successfully negotiated the preliminary rounds to take their place in the gold medal contest.

Agbegnenou who was Rio 2016 Olympic silver medallist, had lost her last four contests against the rampaging Slovenian but showed mental as well as physical power to hand France their first world title in Hungary. The Frenchwoman, who was world champion for the first time in 2014, was at her dynamic best in Budapest and forced Trstenjak to commit basic errors as the Slovenian received three shidos and the red backpatch reserved for the reigning world champion finally had a home.

Agbegnenou said: “This is unbelievable for me, I am so happy to be world champion again. Tina is a good opponent but today I said this was my day and I needed to win for myself and to get my title back means everything to me.

“I think I had a good rhythm and I was prepared for anything today. From the moment I arrived in the arena I believed that today would be my day.”

In the first semi-final Trstenjak defeated World Judo Masters bronze medallist Yang Junxia (CHN) in golden score in a slow burner that could only be settled after five minutes of additional judo when the Chinese judoka was penalised for the third time.

In the second semi-final Agbegnenou bested former Abu Dhabi Grand Slam bronze medallist Agata Ozdoba (POL) in golden score by the smallest margin possible and one which can only occur in added time. A shido against the Polish judoka for a false attack created a separation between the two on the scoreboard and it was Agbegnenou who advanced and confirmed her fourth consecutive World Championships medal.

In the second bronze medal contest world number 18 and Asian Championships silver medallist Baldorj Mungunchimeg (MGL) defeated Yang with a high-flying uchi-mata for ippon. Mongolia have shone all week and now have five medals from four days and still have interest and medal hopes on the remaining three days of competition. 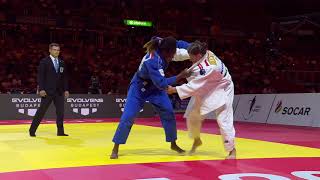 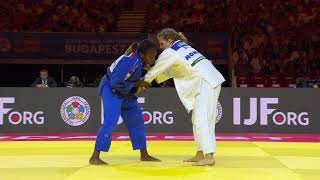 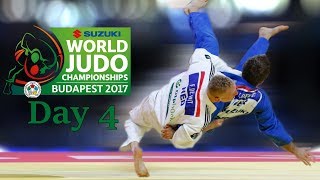