Gemma Howell adds to the British judo success in Sofia Great Britain have waited since 2006 for a new European Champion which happened on Friday, but Gemma Howell thought, why not a second European title, and she did. With two fair chances for gold the British started the tournament, but new one seed Lucy Renshall who had been so strong this year, got surprised by Laura Fazliu of Kosovo, the eventual finalist against Howell.

It was Gemma Howell who prevailed in the contest. Fazliu, coached by Majlinda Kelmendi was the surprise of the tournament who defeated Cristina Cabana of Spain in the semi, couldn’t impress Howell. The British won a bronze medal at the European in 2018 and two Grand Prixs in 2019 was this time on a mission. The last time Great Britain won two European titles was in 2006, the last time to women won the title was in 1992 when the British were still dominating European women’s judo.

There was another bronze for Israel as Gili Sharir defeated Cristina Cabana of Spain. Sharir lost to Szofi Ozbas (HUN) in the quarter final but came back in the repechage. Ozbas claimed the bronze as well after her victory against Renata Zachova of Czech republic. It was the first, and not the last European medal for Ozbas.

The field U70kg was quite strong and a final between Olympic medallist and reigning European Champion Sanne van Dijke and former World Champion Marie-Eve Gahie says it all. Van Dijke had a 5-1 record against Gahie and three times Van Dijke blocked Gahie on her way to a medal. It started differently though as Gahie scored the first wazari in the first minute. Gahie who is on good form won the Grand Slam in Antalya and bronze in Tel Aviv, where Van Dijke claimed a silver medal in Israel. This time the colour was the same as Gahie was smart to kill the time on the ground with severe attacks. Van Dijke ran out of time despite a last attack just out of the regular time and Gahie celebrated her first European title.

Margot Pinot caught Olympic silver medallist Magdalena Polleres by ippon with a right sided morote seoi nage. Anka Pogacnik (SLO) defeated Hilde Jager (NED) for the second bronze after three penalties and was emotional after such performance today, one of her most precious medals ever. 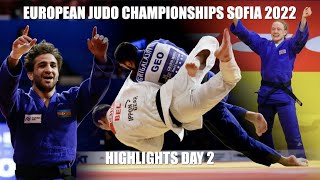 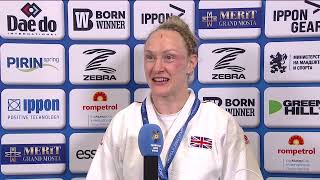 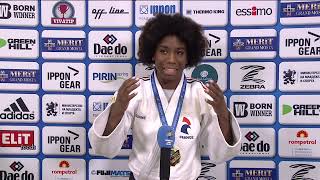