Olympic silver medallist Odette Giuffrida of Italy defeated Israelian Gili Cohen to win U52kg gold. Both judoka had struck Grand Prix gold on one occasion previously and for both their victories were in Tbilisi. Giuffrida added to her 2016 Tbilisi win by catching 2014 winner and Ekaterinburg Grand Slam winner Cohen with ashi-waza as a de-ashi-barai earned a second and match-winning waza-ari.

In the first semi-final Cohen bested Paris Grand Slam bronze medallist Astride Gneto (FRA) after four and a half minutes of golden score. After a marathon match-up Gneto was dismissed with her third shido for going out of the area. In the second semi-final former Ulaanbaatar Grand Prix bronze medallist Khorloodoi Bishrelt (MGL) fell to Giuffrida after six minutes of golden score. The Mongolian was reprimanded for being passive to send the Italian into the final.

The first bronze medal was awarded to world number 50 Larissa Pimenta (BRA) who earned her first IJF World Judo Tour medal by defeating Bishrelt. Mongolia’s youngster was penalised for a false attack in golden score and was disqualified as it was her third indiscretion.

The second bronze medal was won by Gneto who floored Junior European Championships gold medallist Faiza Mokdar (FRA) with an o-soto-gari for ippon on the edge of the area. 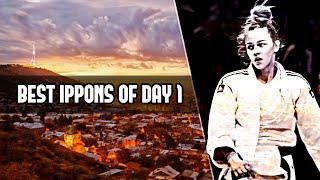