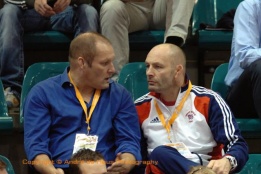 Peter Seisenbacher is the most famous Austrian judoka ever who became double Olympic Champion in 1984 and 1988. Seisenbacher was World Champion in 1985, coached by George Kerr. He won 8 European medals and the title in 1986. Peter became coach and won the Olympic title with Georgia and World title. Austrian two-time Olympic Judo champion Peter Seisenbacher pleaded "not guilty" at the beginning of his trial for the sexual abuse of three minors here Monday morning. Seisenbacher sees himself as the victim of a conspiracy, according to reports by the Austrian Press Agency APA. Read more