Clarisse Agbegnenou was again judo in a great shape. She took her fifth World title in her career and has a lot of years to go. In the moment there is no one who can beat her, only Miku Tashiro could give her a good match, but Agbegnenou is the undisputed favourite for that desired gold backpatch.

Agbegnenou overcame Andreja Leski in the final for women U63kg. It was the third confrontation between Agbegnenou and a Slovenian opponent in a world final. Twice against Trstenjak. Shido actually gave a good match against Agbegnenou and had a few techniques to try to score but Agbegnenou also has a strong defense and can counter out of nowhere. One minute for the end Agbegnenou scored with o-soto-gari and took Leski in oseikomi, but she just escaped but again Agbegnenou again rolled her back into the hold down and won the match and showed her five fingers for her five world titles.

Anja Obradovic (22) became the first Serbian female medallist at the World Championships since 2003 achieved by Mara Kovacevic. Obradovic was the surprise of the day and came out of nothing and defeated Anriquelis Barrios of Venezuela. She recently became Serbian champion, but the pace in Serbia in the women’s team is amazing. They have so many possibilities nowadays, a work of years, but it’s all happening. We knew Obradovic has the skills, she took World bronze at junior level in 2018 and silver in 2019 alongside many European medals and even Cadet European titles, but never medalled in the IJF World Tour, only once she took a World Cup medal and even in Belgrade. Obradovic definitely was the dark horse in this strong field. Today she surprised strong athletes such as Maria Centracchio, Martyna Trajdos and Katharina Haecker and lost to Sanne Vermeer before she defeated Maylin Del Toro Carvajal of Cuba. Her last fight against Anriquelis she started to believe she could write history. Half a minute in the golden score she scored her point against Barrios with kata guruma where she controlled Barrios with her elbow, one of her best techniques that also catapulted her chances to qualify for the Olympic Games afterall. Her one year older sister and family will be proud.

Sanne Vermeer (23) wasn’t a surprise, the Dutch student won her an intense fight against the experienced Ketleyn Quadros (33) who led the match by wazari but Vermeer didn’t drop her ambitions and scored back. One minute for the end she scored with Tani Otoshi in a straight ippon and took the first Dutch medal at this Championship. Both players had a very offensive tactics, both wanted to score but Vermeer has all the talent needed for an Olympic medal, but won’t go to Tokyo. She is one in shape for her country. Vermeer defeated Obraadovic in the quarter final and won her pool before she bumped in the wall of Agbegnenou in the semi final. Vermeer just missed out for bronze in 2019 and this time won that desired medal. 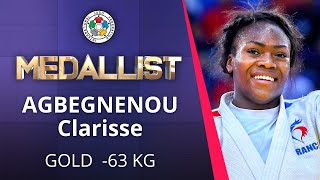 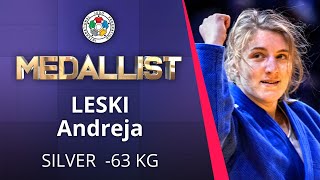 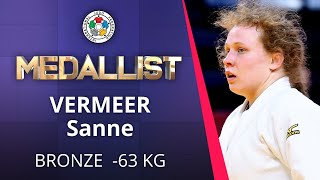