Two-time world medallist Nekoda Smythe-Davis of Great Britain stormed past Grand Slam debutant Ketelyn Nascimento (BRA) in the U57kg final to win Grand Slam gold for the second time in her flourishing career. Londoner Smythe-Davis, who won the Düsseldorf Grand Slam last year, got stronger as the contest went on and pulled away from her new opponent in golden score with a thunderous o-soto-gari for ippon after two minutes of additional time.

In the first semi-final Olympic champion Rafaela Silva (BRA) was stunned by her younger teammate Nascimento who prevailed by a waza-ari score. Silva has been on the receiving end of an upset from her new senior teammate before at the Trofeu Brasil Interclubes last year but could not reverse the outcome this time around.

In the second semi-final former Tashkent Grand Prix winner Theresa Stoll (GER) lost out in golden score against Smythe-Davis by a waza-ari after eight minutes of added time.

The first bronze medal was awarded to Stoll who launched Düsseldorf Grand Slam bronze medallist Sarah Leonie Cysique (FRA) for ippon. Germany got off the mark thanks to Stoll who picked up and planted her French rival for the maximum score for a huge result which will push her into the top five on the IJF World Ranking List.

The second bronze medal was won by Silva who saw off European Games bronze medallist Telma Monteiro (POR) in golden score. The familiar foes, who stood on the medal podium together at Rio 2016, could not be separated in regulation time but Silva only needed an additional 13 seconds to win by a waza-ari score from an o-uchi-gari. 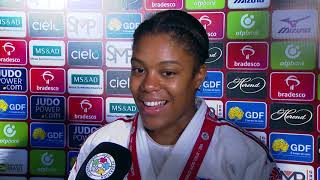 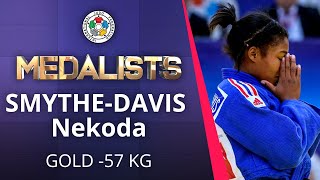 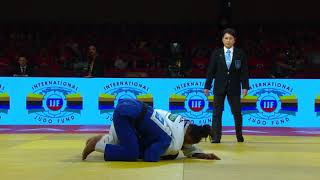