Georgian Vazha Margvelashvili clinched his fourth Grand Prix title with a hard-fought win over Abu Dhabi Grand Slam bronze medallist Baruch Shmailov (ISR). The world number two defeated the world number five by a waza-ari score from a uchi-mata-sukashi as the Georgian was unbeatable in The Hague just as he was in Abu Dhabi a fortnight ago.

In the first semi-final Abu Dhabi Grand Slam gold medallist Margvelashvili who launched Budapest Grand Prix bronze medallist Denis Vieru (MDA) with a sasae-tsurikomi-ashi for one of the best ippons of the day. In the second semi-final nine-time Grand Prix medallist Dovdon Altansukh (MGL) felt the full force of Shmailov who saw off his Mongolian opponent with a thunderous o-soto-gari for ippon.

The first bronze medal was won by Paris Grand Slam bronze medallist Sebastian Seidl (GER) who emerged triumphant after a 10-minute bout against Dovdon. After a stalemate in regulation time the Mongolian tried a ura-nage but it collapsed with Seidl on top and the grateful German applied a tate-shiho-gatame but Dovdon slipped out. After six minutes and 21 seconds of added time, Seidl was declared the winner after his opponent was reprimanded with a third shido for pushing his opponent out of the contest area.

The second bronze medal went to IJF rookie Kido Kiyotaka (JPN) who beat Vieru by two scores to leave his first IJF World Judo Tour competition with hardware in The Hague. Kido, who led by a waza-ari, wrapped up his win with a explosive ippon-seoi-nage to inflate his country’s medal tally on day one. 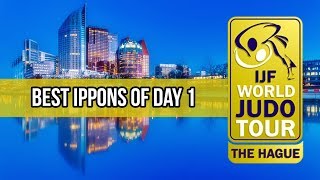 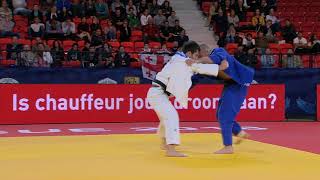 4 Nov 2017 08:30
Bundesliga final four with many stars and top preparation