Double Olympic medallist Gella Vandecaveye is one of those judoka who gives judo training to football players. This morning the Belgian team of RSC Anderlecht was given a judo training. Focus was ukemi, but as well stabilization practices, coordination and mainly injury prevention.

The former Belgian double World Champion in judo and 7 time European champion addresses the importance to work outside of the scope of judo as each sport can learn from the training  and skills of other sports.

Anderlecht is considering to give ‘judo’ training a permanent character. Judo training is given on weekly basis in some Premier League clubs as well as Ajax in The Netherlands. Anderlecht wants to be the pioneer in Belgium.

Marcin Wasilewski is a Polish defender of Anderlecht who’s one of the strongest weighing about 90kg and 1.88m tall was given the chance to escape from a oseikomi by Vandecaveye in 30 seconds. But he couldn’t escape under the cheers of his teammates. 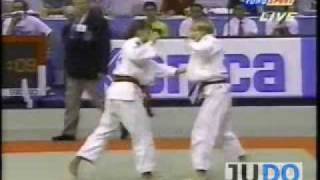