There are a few techniques that Koga unexpectedly did in competition. Mostly these were used sparingly throughout his career. They are unusual and rare.

In his first match at the 1988 Seoul Olympics, Koga had great difficulty with his South Korean opponent, who was intent on spoiling the match and simply refusing to come to grips. Without a proper grip, Koga was not able to do his usual seoi-nage or kouchi-makikomi. Instead, he relied on an opportunistic footsweep that scored koka. It was enough to win him that match.

At the 1991 Barcelona World Championships, he had no problems throwing his opponents except for one: the Italian Massimo Sulli, whom he met in the quarterfinal. Again, it was a foot sweep that saved the day for Koga.

Koga also relied on a footsweep in his second match at the 1996 Atlanta Olympics, where he faced the cagey Polish fighter Bronislaw Wolkowicz.

It seems whenever he is not able to do his big throws, Koga would often rely on a foot sweep.

Koga was not a leg-grabber. In fact, his judo was very upright. But in his quarterfinal match against Wieslaw Blach of Poland, he actually resorted to a leg grab, which was highly unusual for Koga. Theirs was a very tight match that ended up being decided by a hantei. Koga was given the decision for putting in more attacks including this leg grab, which had the Polish player stumbling off the mat area.

Koga was also not much of a counter player. He was always pushing forward, always going for the big throw. However, in his first match at the 1996 Atlanta Olympics, he countered with ura-nage after his Taiwanese opponent attempted a drop seoi-nage. This was the only known instance of Koga doing ura-nage.

See the other articles and photos in action at JudoCrazy 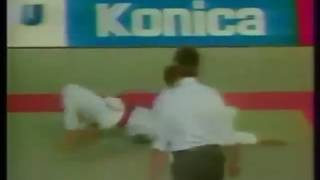 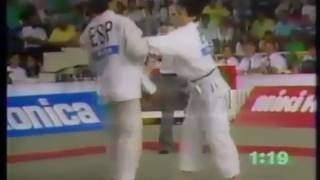 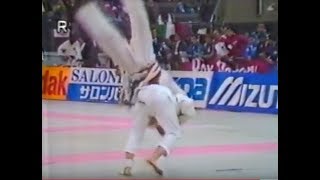 15 Apr 2022 09:45
Which judoka has the biggest gap between world and Olympic title
All news