If the IJF World Tour starts to spin the wheel many weekends are made to make noise and the one who shines with his own light in terms of decibels is Jorge Fonseca, because when the Portuguese powerhouse scores ippon, which happens often, the body of his opponent usually flies very high before landing with a crash. Fonseca rhymes with ippon and people love it because his judo is about fun, speed and power. There was a lot of interest in seeing if the Portuguese would measure up in front of his fans in Almada.

Everyone was expecting a match between the U100kg world champion, Jorge Fonseca (POR), and the -90kg world champion, Nikoloz Sherazadishvili (ESP), both crowned in Budapest last year, in the second round in Portugal but after Sherazadishvili lost against Khangal Odbaatar (MGL), the way to the final was wide open for the local star Jorge Fonseca, who displayed his powerful, explosive judo throughout the morning.

Probably not on top of his form as the main objectives of the season are still far away, the Portuguese ball of muscle nevertheless executed some of the most spectacular techniques of the weekend. Fonseca is a showman and his judo is always enjoyable. For sure the public had the same feeling.

He was not even inside the competition area when the crowd began chanting 'Jorge, Jorge’ and the noise level went even higher when Fonseca stepped on to the tatami. Within thirty seconds the world champion had already attacked three times and a few seconds later the real attack came in the form of an o-soto-gari, followed with an immediate change of direction for seoi-nage and a tremendous throw. That's the problem with judoka such as the Portuguese man: you know what he is going to do, you know where the movement will come from, you do everything to avoid it, but in the end he does it anyway, just as planned and of course he scores with one of the most beautiful ippon throws of the weekend.

Never ranked before during an IJF event, Giorgi Beriashvili (GEO) qualified for the bronze medal contest against Marko Kumric (CRO), who did finish on the podium in Zagreb in 2021. Unfortunately for the Croatian athlete, this time the medal went to Georgia after Beriashvili threw for waza-ari and followed with an immobilisation for ippon.

With only a fifth place at a grand slam to his name, Adil Karimli (AZE) had no record on the WJT. To get on the podium he stood opposite L.A. Smith III (USA), who had a really good morning session, despite his rapid loss against Fonseca in the semi-final. Apparently dominated by the strong grip of Karimli, Smith, just before halftime, launched a left handed seoi-nage for a waza-ari, converted to ippon after video refereeing, to win a well-deserved bronze medal and a premiere result at this level.

Swiss men have only been in the IJF World Tour final six times, five times a final was lost. Domenik Wenzinger won the first Swiss final though in Rijeka's Grand Prix. Followed by five lost finals, however twice this weekend which is remarkable for the Swiss men. Freddy Waizenegger and Daniel Eich claimed precious silver in Almada. 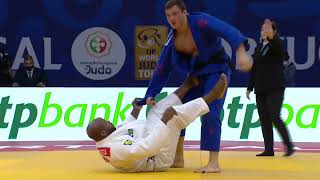 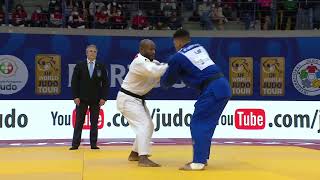 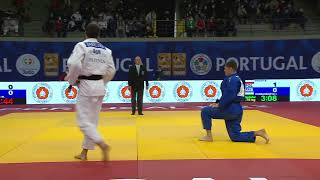