French Clarisse Agbegnenou wants to reach the ultimate and forever stardom in her country this year, but in judo she is our star anyway. With four world titles and six finals, Agbegnenou is no doubt the big favourite in Budapest for another golden day U63kg.

Since the 2017 Worlds in Budapest she didn’t give away anything, well… one slip in Qingdao’s World Masters in 2019. In the final against Nami Nabekura (JPN) and she is the one to represent Japan in Budapest. That makes Nabekura the other top favourite.

Without Tashiro (JPN) and Trstenjak (SLO) two other medal candidates give some space to the best of the rest. Andreja Leski will definitely aim to replace Trstenjak. Dutch women Sanne Vermeer and Juul Franssen will fight for the medals. Franssen will go to Tokyo but Vermeer is more stable and has better chances for a medal this time. Vermeer is also seeded number four against Franssen number seven. Number seven fights the number two seed if both survive the prelims.

The battles between compatriots are almost over in this category. British Lucy Renshall and Amy Livesey are the exception but are not expected to take a medal in Budapest, but you never know how much the drive that gives them unexpected spirits. Both British are unseeded.

Under normal circumstances we will see strong Pan American names like Ketleyn Quadros (BRA), and Maylin Del Toro Carvajal (CUB) who is seeded as number eight and is likely going to seeded in the pool with Agbegnenou. Also Australia’s pride Katharina Haecker may want to give her confidence a boost. We estimate a few outsiders for you in Martyna Trajdos (GER), very experienced but a bit loose from the top now. She needs a good result to catapult her form for Tokyo. Gili Sharir (ISR) and Ekaterina Valkova (RUS) perhaps Hungarian strong Szofi Ozbas might surprise a few top athletes to reach a top 8 position. 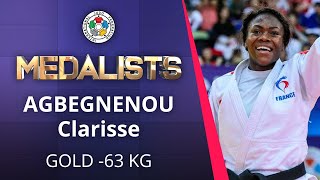