The final for men U90kg at the Grand Slam in Antalya had two strong candidates for the gold medal in Marcus Nyman (SWE) and Toth Krisztian (HUN). Nyman was winner in Tbilisi last week and Toth bronze medallist in Tashkent and Tel Aviv earlier this year. Judo fans witnessed an interesting final, a clash of two athletes with totally different styles, due to their different morphology.

Marcus Nyman is tall, slim and has infinite arms, while the other, Toth, is shorter, compact and incredibly strong. They totally neutralised each other during normal time. It was only in the golden score period that after an action that seemed to be in favour of Toth, at the very last moment Nyman turned and countered the Hungarian for a waza-ari and took a fourth gold medal in a grand slam.

In the first bronze medal contest Li Kochman (ISR), fifth in Tbilisi faced, Mihael Zgank (TUR), silver medallist in Tel Aviv in 2020. Zgank seemed to control the match, even if only shido had been given so far, when Kochman engaged a strong o-soto-gari, combined with a powerful change of direction for a waza-ari.

For the second bronze medal contest David Klammert (CZE), whose last medal on the World Judo Tour was in Tunisia in 2018, was opposed to Komronshokh Ustopiriyon (TJK), already the holder of 8 grand prix medals but none from a grand slam. Klammert was a little behind during the first 4 minutes, receiving two shido, while Ustopiriyon seemed stronger but couldn't throw. Endangered by the possible third penalty, Klammert kept attacking in the golden score period and was happy to score a waza-ari just outside of the competition area, but it was totally valid as it began inside the area. This is a first medal in a grand slam for the young competitor.

Mukai Shoichiro (JPN) is the Japanese athlete selected by the All Japan Judo Federation to participate in the Olympic Games this summer. Thus, Antalya was supposed to be a good test for him. Unfortunately for him his competition was pretty short as he was defeated by Abderrahmane Benamadi (ALG) in the first round. That was definitely the biggest surprise of the day. 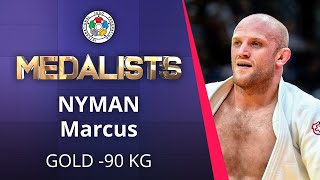 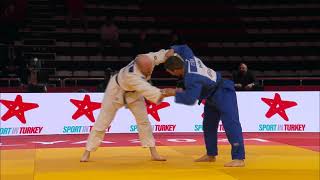 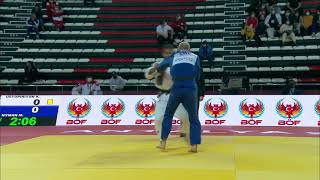