Shishime 21, and Oshima 19, two of Japan’s latest starlets from their unrivalled production line, were well-matched and respected their counterparts ability as they failed to register a score but the former received only one shido for passivity while his opponent picked up two for passivity and a false attack.

There was double delight for Japan in the semi-finals as they defeated Kazakhstan opposition in both contests. Shishime booked his place in the final by humbling Kazach Asian Championships bronze medallist Yeldos Smetov on shido penalties after a hard-fought contest. OSHIMA confirmed an all-Japanese final by defeating Almaty Grand Prix bronze medallist Rustam Ibrayev (KAZ) by ippon with a minute remaining.

The first bronze medal was claimed by former Junior European Championships silver medallist Vincent Limare (FRA) who defeated losing-semi-finalist Smetov. After receiving a shido for passivity the Frenchman had to be alert to block a bold tai-otoshi attempt before scoring a yuko with ko-uchi-gari only for it to be removed upon removed by the IJF Referee Commission. LIMARE improved as the contest went on and there was no doubting his score when he caught Smetov with an osoto-gari for a waza-ari to claim the first Grand Prix medal of his career with a workman like display. The second bronze medal went to Olympic champion Arsen Galstyan who ended the medal tilt of IBRAYEV by dispatching him for ippon with a ko-uchi-gari to bounce back from a frustrating morning in Dusseldorf with a much-needed place on the podium. 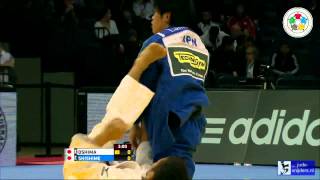 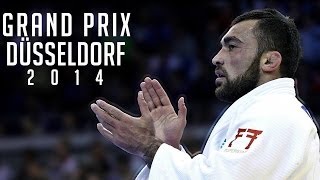