JudoInside was already present at the 1992 Barcelona Olympics where we saw a stylish Cuban player Israel Hernandez. He impressed us but now we realise that his opponent Kenji Maruyama is the father of the current World Champion, Joshiro Maruyama. On his way to winning his first Olympic bronze medal both met in the Palau Blau Grana. Hernandez would go on to win a second Olympic bronze at the 1996 Atlanta Olympics. JudoCrazy's Oon Yeoh recaptures this special contest. Today is his 52th birthday.

Hernandez had a good run in the preliminary rounds, easily overcoming Danut Pop from Romania, Abdelhakim Harkat from Algeria and Stefan Cuk from Slovenia. However, he had a real fight on his hands in the quarterfinal where he had to face Maruyama of Japan, who had earlier defeated Benoit Campargue of France and Jimmy Pedro of the USA.

Maruyama was winner of the 1991 Kano Cup, 1991 Asian Judo Championships and 1992 Tournoi de Paris. Hernandez meanwhile, had won the Pan-American Championships in 1990 and had come in fifth place in the 1991 Barcelona World Championships.

On paper, Maruyama had the edge when it came to top-level international results. However, Hernandez was not fazed by the Japanese player’s credentials. In their quarterfinal match, Hernandez attacked first, throwing Maruyama with a morote-gari that very nearly scored. Maruyama replied with kouchi-makikomi and kosoto-gake. Both were good attacks but did not score.

After three minutes of back-and-forth attacks, Hernandez got his first score with a uchimata into kouchi-gari combination that earned him a koka. He continued to rough up Maruyama, unsettling him with attacks like morote-gari. These seemed less like real attempts to score but more to prevent the Japanese from getting his favorite grip to do uchimata.

An opportunistic kouchi-gari leg grab earned Hernandez another yuko, placing him firmly ahead of the Japanese.

A desperate Maruyama attacked with uchimata a couple more time but without the right grip, he was not able to make his favorite technique work.

Hernandez's theatrics included a newaza cartwheel which had the crowd cheering.

With time running out, Hernandez engaged in some time-wasting newaza (which included a crowd-pleasing cartwheel to reposition himself) to run the clock out and win the match.

Israel Hernandedz lives in the north of San Diego where he has his own dojo. He is married to Valerie Lafon Gotay, a USA Olympian 1992 and 2008. 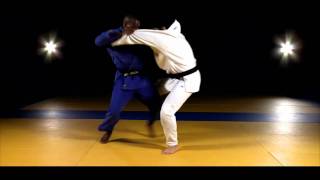 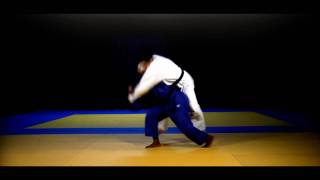 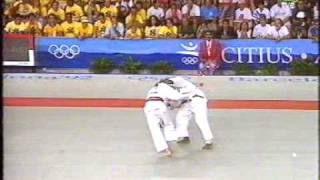