Slovenian judoka Kaja Kajzer was still a teen when she won the Grand Prix in Tel Aviv this year, an early birthday present. The youngster always had to fighter older rivals and that made her who she is now. She medalled at the Junior Worlds and now her focus is to qualify for the Games. She even took a sabbatical to realise it. Covid-19 though prolongs that period and JudoCrazy’s Oon Yeoh asked how Kaja is dealing with the situation.

JIC: How has the Covid-19 situation affected your training?

KK: We had to stop judo training for a while, but I have equipment at home to train and maintain my physical strength. With the situation in Slovenia slowly calming down, we can now start to train in judo again. So far we've been doing it for about a week. I did however, gain some weight during the lock-down.

JIC: How high did it go?

KK: At one point I weighed almost 63kg but it's now back down to 60kg, which is my usual weight.

JIC: What technique do you use to cut weight for a competition?

KK: Usually, I start drinking a lot of water two weeks before a competition, so that I fill my body with water. A week before the competition I reduce the amount of food that I eat, and three days before weigh-in, I eat very little. I drink normally but on the last day I will use a sauna suit. On the weigh-in day itself, I usually don't eat or drink anything.

JIC: Your weight category of -57kg is arguably the most competitive one in the women's division with many capable fighters. Who do you look forward to fighting the most?

KK: I'm looking forward to facing Nora Gjakova of Kosovo, Rafaela Silva of Brazil, and Jessica Klimkait and Christa Deguchi, both from Canada.

JIC: Can you tell us how you got started in judo?

KK: I was introduced to judo in elementary school when I was eight years old. My older brother was already training at the time, so one day I joined him in training. I found it very interesting, so I decided to take it up as well.

JIC: Was judo the only sport you did while growing up?

KK: I also trained in athletics, rock climbing, rhythmic gymnastics and kayaking. I was into a lot of sports but my main ones were judo and kayaking. At the age of 11, I had to decide which of the two o pursue seriously and I chose judo."

KK: There were several reasons. I had many friends in judo, I also felt I had more potential there but most  importantly, I simply enjoyed judo more. You might find it interesting to know that my brother did the opposite. He gave up judo to pursue kayaking.

JIC: Which club do you currently train at and why did you choose this club?

KK: I have always been a proud member of the Bežigrad Judo Club. It’s a large club with many members. The club operates very professionally and puts a lot of effort and investment into its athletes. Something that I really like it that there's always a very good atmosphere in the training hall.

JIC: Are there many other girls who are competitive at your club?

KK: There are not that many tough Slovenian girls at my weight. Most are younger than I am and are not very experienced but they are still good randori partners as I can try new techniques on them. I also train with some of the younger guys and they give me a good randori.

JIC: I noticed Fighting Films made a special judogi for you with the Slovenian flag colors on the FF gates. What's your relationship with FF?

JIC: The deal for the kimonos (judogis) was negotiated by our club president, so the whole team wears FF. The fact that we have FF logos in the colors of the Slovenian flag makes it very special. The kimonos are good quality and I like training in them. I just wish they could be a bit harder for my opponents to grip but I realize there are strict IJF regulations about that!

JIC: Uchimata seems to be your favorite technique. Do you practice it a lot?

KK: Uchimata is my go-to technique but to be honest, I don't like practicing it. I think this is because I had practiced it so much when I was younger. Because I know I can always rely on my uchimata, it frees me up to work on new techniques. For example, I'm fascinated by the drop kata-guruma that Manuel Lombardo uses. It's a surprise technique that's hard to defend against.

JIC: Are you naturally left-handed? Do you feel it gives you an advantage?

KK: I'm naturally left-handed. When I started practicing judo, I trained right-handed like others for two years, because no one knew I was left-handed. Being a lefty used to be a big advantage but not anymore. I find these days there are a lot of left-handed opponents and some players seem to be able to switch from right to left quite easily.

JIC: Are you an instinctive player or do you analyze and strategize a lot?

KK: I do analyze my opponents with my coach so that he can advise me on what to look out for and how I should fight them in different situations. But there's only so much strategizing you can do. Once you're on the mat fighting, you have to improvise and fight instinctively.

JIC: You have just turned senior but you have been competing at senior international competitions for years now, and got your first IJF senior medal in 2017. How did you feel competing in the senior division while still a junior?

KK: Actually, I've always been competing against older opponents. When I was a cadet, I competed in the juniors and when I was a junior, I competed in the seniors. Being younger than my opponents never bothered me. What bothers me when I lose a match and someone tries to comfort me by saying, "It's okay, you're still young!"

JIC: Some players who did well at the junior level struggled at the senior level, but you have managed to adapt very well. Do you think that's because you are used to fighting older players?

KK: I think so. When I transferred from school judo to club judo, I trained with my brother in the older group, so I was always training with older, heavier, stronger teammates. From a young age, I used to go to various training camps in search of tough, older opponents. I would get beaten most of the time but that experienced benefited me a lot.

JIC: When you won your first IJF Grand Prix gold medal in Tel Aviv this year, you did a heart-shaped symbol with your hands. Is that something you planned?

KK: As I was preparing for the final, I watched other contestants fight and a lot of them showed this heart symbol after they won. I also wanted a photo like that, so I took the opportunity to get one when I won my gold medal!

JIC: What motivates you to compete at such a high level? There is not a lot of money in judo. Why do this?

KK: There's not much money in judo, especially in Slovenia. I'm aware of this. But ever since I was a child, my goal has been to get an Olympic gold medal, not money or fame. I want to prove to myself, and to everyone, that I can be a judo champion. There's not a lot of money in judo but whatever money I get from winning judo competitions I will save for my studies because I want to become a physiotherapist after my judo career is over.

JIC: Are you currently not a student?

KK: I'm currently not a student because I took a one-year break to focus on the Olympics. Now that it's been postponed, I'm reading up on anatomy and other things, because I plan to take up physiotherapy for my studies.

JIC: But the Olympics is still happening. Will you study or train?

KK: I hope to be able to do both but once the Olympics draws near, I'll focus on judo.

JIC: How do you view the postponement in terms of what it means for your Olympic goals?

KK: When I first heard the news I was sad and angry at the same time. I lost all motivation to train for about a week. But now I see things in a different light. I think the one-year delay could be a blessing in disguise. It gives me more time to prepare, to learn new techniques and to gain competition experience. There's no question I will be a better fighter next year.

JIC: Do you sometimes feel that as an elite athlete, you have to give up a lot of things?

KK: There are sacrifices to be made, for sure, but I'm not extreme about it. I don't want to waste my youth, so I do spend time with friends, socializing and partying with them.

JIC: Do you have time for a social life?

KK: There's always time for friends. When I spend time with good friends, it puts me in a good mood and I get re-energized for training the next day.

JIC: As a sports personality in your country, do you get a lot of fan mail?

KK: I get a lot of messages. Some of them are from judo fans and I'm always happy to answer those. But messages from men who want me to go out for a drink with them, those I just ignore! 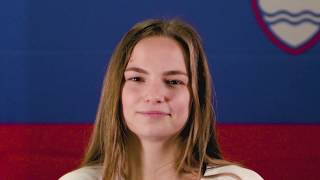 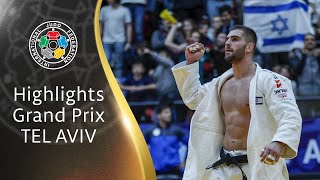 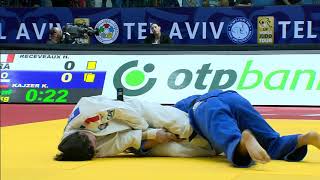