In the beginning of this Olympic cycle Slovenian judoka Mihael Zgank took a silver medal at the World Championships in Budapest. It took a while but he switched to Turkey and took the name of Mikail Ozerler. Ozerler clinched the gold at the Grand Prix in Antalya in 2019 and captured the European Games gold in Minsk. We can’t say this qualification for his second Olympic Games was boring. JudoCrazy’s Oon Yeoh spoke to the current European Champion U90kg.

JIC: Are you currently in Slovenia or Turkey?

MO: I’m in Slovenia right now. When the situation with Covid-19 became serious, I was given a choice between staying in Turkey or going back home. I decided to return home because there’s no way of telling how long this will go on.

JIC: Normally, when you were in Turkey, how often did you go back to Slovenia for a visit?

MO: Typically I would go back every half year or so but sometimes it’s sooner than that. Maybe after a few months, I would go back. It’d be a few times a year.

JIC: How did you end up fighting for Turkey?

MO: I got an offer from their federation after I got the silver medal at the 2017 World Championships in Budapest. What a lot of people don’t realize though is that even before that, I was already looking for a change. I felt I need to find better training conditions so I can fulfil my full potential as an athlete.

JIC: What were you looking for, exactly?

MO: I wanted to be part of a proper men’s national team. You see, in Slovenia, there is not a real national men’s team set-up. Everyone is based in their own clubs so the men’s national team doesn’t actually train together. In Turkey, they have centralized training. They offered me financial support. By joining them, I would be able to focus on training and not worry about anything else.

JIC: How did the Slovenian Judo Federation react when you applied for the change?

MO: They were not supportive, as you can imagine. I had just become the first male player from Slovenia to get a World silver medal, so I can understand why they did not want me to do this.

JIC: What about your coach, was he upset at you for wanting to do this?

MO: No, not at all. My coach, Marjan Fabjan, was very supportive because he, himself, had gone abroad when he was younger. He lived in Austria or seven years, so he understands full well the value that overseas exposure gives you.

JIC: After you moved to Turkey, you are known as Mikail Ozerler. Was changing your name a requirement?

MO: Yes, this was necessary in order to speed up the passport procedures. But I’ve managed to work things out with the authorities so that in the future I will be fighting under my real name.

JIC: Was moving to Turkey also part of the requirements?

MO: No, it’s something I wanted to do. Like I said earlier, I’ve always wanted to be part of a strong men’s national team. In Turkey, their federation president, Sezer Huysuz, and head coach, Irakli Uznadze, have formed a great team and this made the decision to move an obvious one for me.

JIC: Do you think that the fact that Huysuz and Uznadze were themselves former high-level competitors is a key reason for the success?

MO: Definitely. They really understand what a sportsman goes through, the challenges we face and so on. They know what we need to succeed because they have been top-level athletes themselves.

JIC: Were you able to adjust well to life in Turkey?

MO: It was kind of hard at first and I must admit, there were times when I found myself wondering if I had done the right thing. Language was a big challenge because my coach can’t speak English. So, I was forced to learn the language in double quick time.

JIC: Do you speak Georgian or Turkish with your coach?

MO: At first, we tried to use a bit of Russian but as I managed to pick up Turkish quite fast, nowadays we speak Turkish to each other.

JIC: What have you noticed to be the main difference between the training you had in Slovenia and what you have now in Turkey?

MO: The main difference is centralized training. In Slovenia, most of your training is done at your own club. In Turkey, you only go back to your club after you have spent weeks or even months training with the national team.

JIC: What about training style?

MO: Well, in Slovenia, it was very strict. In Turkey, less so. In fact, in Turkey, I had to find ways to motivate myself to push harder, but that’s not a problem because I have a military background. So, I know how to do it.

JIC: Can you give some examples of how strict it was for you in Slovenia?

MO: Our first training session starts at 6.00am so that we could get some work done before going to school. Then there would be another training at 7.00pm. When there was no school, we’d have trainings three times a day: morning, afternoon, evening. We weren’t allowed to drink or talk to each other in between randoris. And if you were too worn out, too bad, you still had to train. There were days when I trained even though I was sick. It was really harsh but it also made me tougher.

JIC: In Slovenia did you have enough training partners?

MO: No, and it didn’t help that I’m a heavier weight player. At least the lightweight guys could randori with the girls, but for me it was always hard to find appropriate partners. I even had to resort to travelling to other countries, alone, just to get some good randoris. In Turkey, I always have enough training partners. Even in my own weight category alone, there are a few guys who can give me a good fight. There are also plenty of junior guys just coming up the ranks who are good sparring partners. In Turkey, getting enough randori is not a problem.

JIC: Have you been to Japan to train?

MO: I’ve been to Japan 10 times already. I love it there because there’s judo, judo and more judo. Universities are a good place to train because you never run out of randori partners.

JIC: Slovenia has a very strong women’s team though. Why can’t they do the same for men?

MO: I guess Slovenia is missing a suitable coach for the men’s team. They have a great women’s program but that doesn’t mean it’s suitable for men. Right now, everybody trains the same way but you really need to separate the men’s program from the women’s program because the needs are different — physically, emotionally, psychologically. But this is hard to do in Slovenia because the system is based on clubs.

JIC: What advice would you give an athlete from a small country where there is not a lot of training partners?

MO: I would say don’t get disheartened and make the best out of your situation. Improvise and give yourself new challenges every day. I know it can be hard sometimes but if you will really, really want something bad enough you will do whatever it takes to make it happen. If there’s a will, there’s a way.

JIC: I presume you are in lock-down as well. Are you doing some training at home?

MO: Yes, I am staying at home just like everybody else during this time. I live in a small village so for my training, I try to use nature as much as I can. I love hiking and cycling through the hills around my home. I also have a small gym at my home, with some basic equipment so I can do some strength training as well. Mostly I try not to force anything and just try to enjoy with my workouts during this time. This break is also good for letting old injuries heal.

JIC: What else are you occupying your time with?

MO: I’m still learning the Turkish language. I like to read a good book, which nowadays I have more time for. And, I’m also watching some TV series and movies.

JIC: How do you feel about the Tokyo Olympic being postponed to next year?

MO: To be honest, I was quite disappointed but seeing how serious the situation with the Covid-19 virus had become, I feel it’s the correct decision to postpone the Games. It would have been dangerous and athletes wouldn't have been able to prepare adequately under these circumstances.

JIC: Are you one of those players who analyze and prepare for specific opponents or do you have a more casual attitude towards opponents?

MO: I prepare for every opponent. Yes, I watch videos but what I also like to do is to enter in smaller and less important competitions that they are in so I can get a feel of what it’s like to fight them before the bigger events happen.

JIC: When you come up against a player you have not beaten before, is the feeling different from when you fight someone you have beaten before?

MO: Psychologically of course it’s always a challenge when you have to face someone you’ve never beaten before but generally, I try not to think about how good they are or what they’ve achieved in the past. I try to focus on how I can beat them.

JIC: How do you feel right before a match?

MO: I’m quite a calm person and I am quite relaxed until I pass the judogi control station. Then I start activating myself for the match ahead. I’m never in doubt of my abilities to win, not even for a second.

JIC: Your calmness, is it a result of mental training?

MO: I think mental training can sometimes be more important than physical training. Human beings are complex creatures. Even if you are a confident person, there are times when some things hold you back, like an anchor. You need to release those anchors and visualize where you want to go and what you want to achieve. Act and behave like a winner. I find meditation helps a lot.

JIC: Where did you learn to meditate?

MO: I used an app called “Headspace”. I started with just doing five- or 10-minute sessions and even that was hard at first. But you get better at it over time.

JIC: Any message to judo players around the world who are stuck in lock-down?

MO: Be positive and enjoy the time with our families now that we have the opportunity to do so. 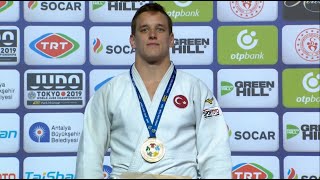 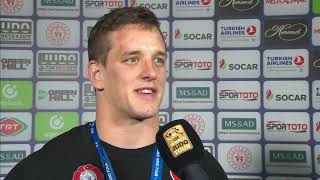 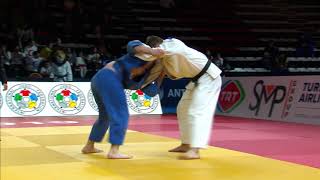