Scottish Olympic bronze medallist Sally Conway won Grand Slam gold for the third time in her career with a rousing display in the U70kg category. Conway defeated The Hague Grand Prix bronze medallist Miriam Butkereit (GER) after taking the contest to the ground and threatening with both osaekomi and the kansetsu-waza and the home judoka was unable to find a route away from the imminent danger.

A trademark juji-gatame from the Scottish judoka settled the final.

In the first semi-final Junior Pan American Championships gold medallist Ellen Santana (BRA) had to submit to a juji-gatame from Conway while in the second semi-final Butkereit beat world number 36 Hilde Jager (NED) on the ground as the Dutch judoka elected to tap out while trapped in a holdddown.

The first bronze medal was awarded to two-time world medallist Maria Bernabeu (ESP) who trapped Jager in osaekomi with a sankaku-gatame for ippon. Spain’s Bernabeu returned to an IJF podium for the first time since 2017 and was understandably elated as she jumped into the arms of her coach in celebration. 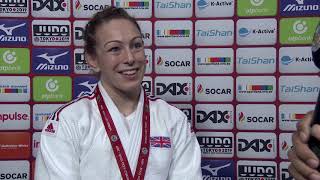 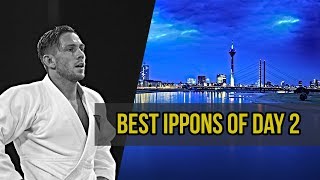