There are also three new titleholders. Nadja Bazynski won her first German championship title in the class U63kg after three silver medals. For Miriam Butkereit U70kg it was the second gold medal for women since 2016. Hamsat Isaev was a surprise with his victory U73kg against defending champion Igor Wandtke.

Stoll remains the number one in her class U57kg. She defeated Sappho Coban in the final, sister Amelie Stoll finished at the fifth place given the tough competition. Bazynski now took the title while her parents were watching in the Arena, this time Dena Pohl was defeated. Martyna Trajdos was the champion last two years and before her Vivian Herrmann twice. The category U70kg for women has always been competitive in Germany. Last ten years six different women took the title and Buttkereit this time regained the title and became successor of Giovanna Scoccimarro who took bronze this edition. Buttkereit overcame Alina Boehm in the final.

With double World medallist Alexander Wieczerzak and Dominic Ressel Germany has two world class players. Without Wieczerzak it’s simply easier for Ressel although the competition is still not so bad in this class. However he won the title for the fourth time in a row which says enough on his qualities. Eduard Trippel won his third consecutive title U90kg but still he was the youngest champion of this weekend in Stuttgart. 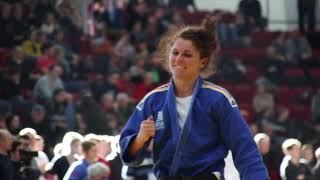 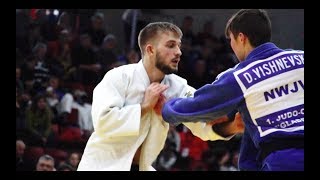 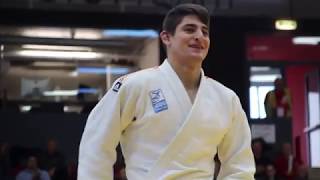