British Alice Schlesinger defended her 2016 Baku title with a mature performance against Tunis African Open silver medallist Andreja Leski (SLO). The modest Briton, who was making her post-Olympic return to competition, saw off world number 63 Leski on the ground as World number 12 Schlesinger trapped the body of her opponent and from there worked the arm-lock until the 20-year-old Slovenian had to submit.

In the first semi-final former Qingdao Grand Prix silver medallist Busra Katipoglu (TUR) lost out to Leski by a waza-ari after one minute of golden score. In the second semi-final Schlesinger defeated home judoka Khanim Huseynova (AZE) by ippon as the former pinned down the Azeri with a kami-shiho-gatame for 20 seconds.

The first bronze medal was won by Katipoglu who defeated 24-year-old Nuriyya Akhundova (AZE) by ippon with a wonderful hip technique to ensure a successful return to action. The Turkish judoka was competing for the first time since the Rio 2016 Olympics while Akhundova was engaged in a medal contest on the IJF World Judo Tour for the first time.

The second bronze medal was won by Huseynova as her teammate and 2012 Baku Grand Prix winner Gulsadaf Karimova (AZE) was disqualified after being penalised on three occasions. The third shido came for passivity with nine seconds left as Karimova will have to wait to record her first Grand Slam medal but the crowd were the most content as they applauded the efforts of their female judoka. 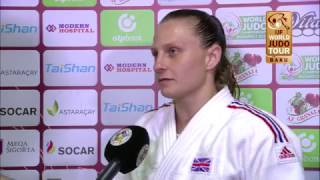 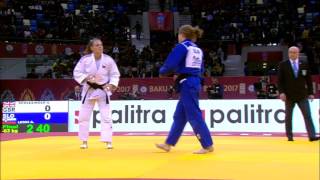 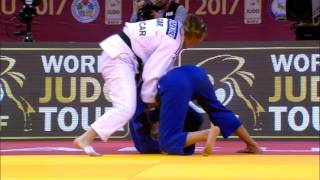