Former world champion and two-time Olympic medallist Audrey Tcheumeo and Tokyo Grand Slam winner Sato Ruika of Japan failed to hit the heights of their performances in the earlier rounds of the Grand Slam in Paris as their tense final narrowly went in favour of the home judoka.

Tcheumeo was coached by French great Lucie Decosse while Sato was coached by former world champion Asami Haruna as both coaches were taking charge of their country’s senior team members for the first time on the IJF World Judo Tour.

Golden score was required as there were no technical scores in the four minutes of contest time and a third shido against the Japanese for passivity resulted in hansoku-make and one more medal for the hosts.

In the first semi-final Tyumen Grand Slam silver medallist Klara Apotekar (SLO) was defeated by Sato in golden score while in the second semi-final Tcheumeo sent Park to the canvas with a thunderous osoto-gari for ippon.

The first bronze medal was claimed by number one seed Guusje Steenhuis (NED) as the Netherlands’ medal surge on the last day continued at the expense of Park. Steenhuis prevailed on shido penalties to win her eighth Grand Slam medal despite having loftier ambitions when she arrived in France.

The second bronze medal contest featured Apotekar and Tunis African Open winner Sama Hawa Camara (FRA). The home fighter won an epic battle with a gargantuan effort as she held down her Slovenian opponent for 10 seconds and a waza-ari score after three and a half minutes of golden score. Camara, 22, improved on her fifth-place Abu Dhabi finish to the jubilation of the fantastic French supporters. 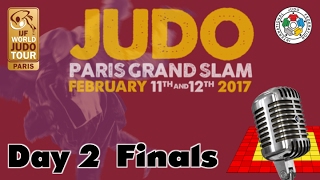