The draw of the IJF Grand Prix in Tashkent took place on Wednesday afternoon at the Wyndham Hotel as IJF Competition Manager Lisa Allan, revealed that 139 judoka (81 men, 58 women) from 15 nations will compete in Asia.

Just 58 Women will battle for the seven gold medals

Sofia European Open winner Mariia Persidskaia (RUS) will be the top seed in the -48kg category on day one of the Tashkent Grand Prix 2016. The world number 46 has two seventh-place Grand Prix finishes to her name and should capture her first medal at this level on Friday. Persidskaia has teammate and Orenburg European Cup bronze medallist Lilia Lotfullina (RUS) for company at -48kg.

Tyumen Grand Slam bronze medallist Tena Sikic (CRO) competes in Uzbekistan for the first time this week and will be the top -52kg seed in Tashkent. The 22-year-old is making her fourth appearance on the IJF World Judo Tour and comes into the event on the back of a fifth-place at the Zagreb Grand Prix. The second Tyumen Grand Slam bronze medallist, Aigul Tashtimirova (RUS), is also present in Tashkent as the 23-year-old makes her Grand Prix debut.

Baku Grand Slam silver medallist Marijana Miskovic Hasanbegovic (CRO) - who had a fine run at the World Championships last year when the veteran Croatian finished seventh – is the oldest judoka and highest ranked in the category. Miskovic suffered a disappointing first round defeat in Croatia two weeks ago and will need to deliver a much-improved performance if she aims to overcome judoka such as Tyumen Grand Slam silver medallist Daria Davydova (USA) and Hannah Martin (USA) who took silver in Tashkent in 2013.

Budapest Grand Prix bronze medallist Gulnoza Matniyazova (ZUB) is the number one -70kg seed on home soil in Tashkent this week. The 22-year-old Asian Championships silver medallist is leading a female revolution for her country and could make that point in the most important setting in her homeland with maximum attention on her exploits. Zagreb Grand Prix bronze medallist Anka Pogacnik (SLO) will be tipped to challenge for her second Grand Prix medal in her second Grand Prix event after a strong display in Croatia while Iana Dibrina (RUS) looks to make a splash as she eyes her first IJF medal.

Two-time Olympian Joo Abigel (HUN) made an ideal start to her third Olympic cycle by winning the Zagreb Grand Prix a fortnight ago and is not letting up as she targets major honours in the sport with the World Championships 2017 due to be held in Budapest. Joo, 26, has mostly Asian opposition in the category such as Almaty Grand Prix silver medallist Albina Amangeldiyeva (KAZ).

Tbilisi Grand Prix bronze medallist Maryna Slutskaya (BLR) is the fighter to beat in the women’s heavyweight category which will be contested on Saturday. The Belarus judoka has finished fifth at Grand Slams in Baku and Tyumen this year and will be fancied to strike IJF Grand Prix gold for the first time. Asian Championships silver medallist Gulzhan Issanova (KAZ) may be 33 but is always highly-competitive and won this event in 2013. Young heavyweight Saneayim Erkinbaeva (UZB) won bronze at the Tashkent Grand Prix in 2013 and we should see signs of progression since then but the 22-year-old has not been as active as she would hope and needs to be higher up on the podium in 2016. 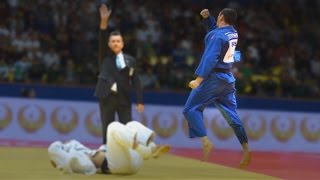