Three Japanese boys and two Croatian girls coloured the podiums on Sunday at the European Cup for Cadets in Bielsko Biala, Poland. The Japanese young men captured gold in the categories U73kg, U90kg and +90kg.

The Cadets are getting in shape for the European Championships in July in Finland. On Saturday the talents of Azerbaijan were strong with three gold medals, on Sunday the men from Japan, but also the young women from Croatia. U57kg Iva Oberan captured gold in the final against Italian Federica Luciano in this division with 44 girls. Lara Kliba of Croatia took the gold U63kg against Polish Eliza Wroblewska. Last year Poland won one gold medal, today two silver medals as heavyweight Julia Swiatkiewicz lost her final against Romane Dicko of France. France actually lost four finals this weekend. Marlene Galandi won the final U70kg against French Melanie Dhaiby. Galandi was the only non-French on the podium.

From today Hungarian Richard Sipocz is the most successful cadet so far this season. Watch the stats. 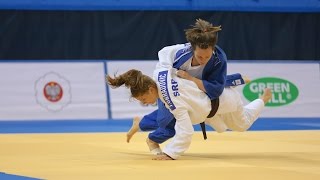