Former World champion Marie-Eve Gahie has been chasing a good result for months but now the long period of scarcity seems over for the one who was unbeatable less than two years ago. Since then there have been doubts and a non-selection for the Tokyo Games in favour of her teammate Margot Pinot who won the Paris Grand Slam in February in the most beautiful way possible. At the Grand Slam in Antaya everything went smooth as in the past and Gahie claimed the gold medal.

Although the matches were sometimes tight, Gahie nevertheless found the necessary resources and remained focused throughout the morning. In the semi-final she defeated Pinot with a superb tani-otoshi for ippon, without discussion.

In the final, Gahie faced Bernadette Graf (AUT), author of a faultless run during the elimination phase. both had met just once in Tbilisi in 2015, after that Graf went to U78kg. Now she is back as one of the few who stepped down in weight, just like Barbara Timo from U70kg to U63kg, also successful.

It didn't take long in the final for both athletes to be in action and during a confused moment, Graf was the first to score with an opportunist’s ko-soto-gake but only a few seconds later, Gahie produced an incredibly strong action-reaction moment that put her opponent totally out of balance. It was fast, it was beautiful and powerful, no chance for Graf and what a great comeback for Marie-Eve Gahie. We'll have to count on her again.

Undoubtedly disappointed with her defeat against Gahie, Margaux Pinot could still be satisfied with a bronze medal but for that she had to pass Miriam Butkereit (GER), which she did brilliantly by applying a juji-gatame for ippon that gave no chance to her opponent. Walking off the tatami, Margaux Pinot took some time to sign autographs for the young judoka present in the venue. This is definitely a good result for the French champion.

In the second match for a bronze medal, Kelly Petersen-Pollard (GBR) faced Maria Portela (BRA) and it can definitely be said that it was difficult for Maria Portela to eventually win but she did so with a really nice set-up concluded with a fast tani-otoshi for waza-ari and the eleventh medal in a grand slam for the Brazilian. 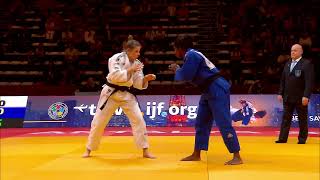 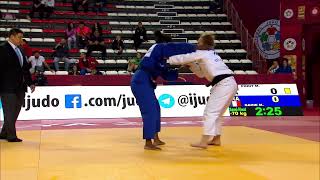 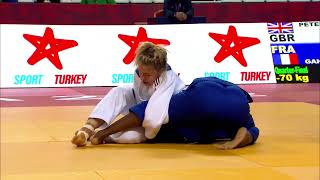 6 Apr 2019 18:10
Elisavet Teltsidou breaks through all barriers
All news