The number one seed Zhansay Smagulov (KAZ) believed in a Grand Slam victory until the very end, but he was stopped in the semi-final by outsider Giorgi Terashvili (GEO). Pointing to a distant 101st place in the world, the Georgian athlete was certainly not one of the favourites at the Grand Slam in Antalya and still took the gold medal. A remarkable step for an athlete who won the Cadet European Cup in Antalya just three years ago.

Thwarting all predictions, he faced Manuel Lombardo (ITA), a competitor with a much richer track record, in the final. It must be said that it was good to see Lombardo in a final again, but unfortunately for the Italian champion, this step against Terashvili was too high after gaining weight and moving from U66kg to U73kg. After having engaged his leg to throw with uchi-mata, the Georgian took a moment to reposition himself and send Lombardo to the ceiling of the venue, for a beautiful ippon. There are no doubts that with this first medal at this level, Giorgi Terashvili won't stay long at his position on the World Ranking List.

After his bronze medal at the Prague European Open, Ido Levin (ISR) had a chance to win his first medal on the World Judo Tour as he was qualified for the bronze medal contest against Salvador Cases Roca (ESP), a finalist at the last Grand Slam Portugal. The first waza-ari came after little more than one minute, from Cases Roca with an o-uchi-gari. By attacking non-stop, Cases Roca had the feeling that he was controlling but actually, he was also taking a risk with false attacks, making mistakes. With a left-handed o-soto-gari, Ido Levin scored waza-ari an equaliser. Golden Score! Having scored with this technique, the Israeli launched it again, but with much less control and dived on his head. He was disqualified and the bronze medal went to Salvador Cases Roca.

In the second bronze medal contest Petru Pelivan (MDA) faced Zhansay Smagulov (KAZ). Smagulov was unable to compete and so the winner of the bronze medal was Pelivan. 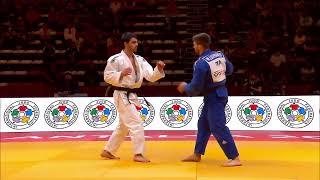 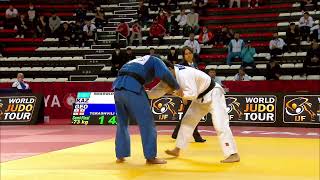 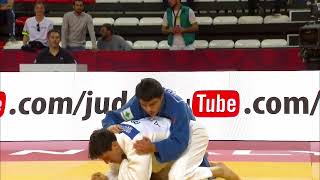