Mongolia's judo lightweight Urantsetseg Munkhbat (31) announced her retirement in judo and will be focusing on a career in Mixed Martial Arts. Munkhbat became World Champion 2013 in Rio de Janeiro. She competed three times at the Olympic Games in 2012 when she finished seventh, in Rio 2016 when she just missed out on the medal and last year in Tokyo where she secured the bronze medal for het country Mongolia.

In 2017 Munkhbat became World silver medallist in 2017 in Budapest and she claimed the bronze in 2019 in Tokyo and 2021 in Budapest. The Mongolian lightweight won the Masters four times in a row (2013-2017) and won the gold at the the Grand Slam in Paris. Also she captured gold at the Grand Slam in Tokyo. In total she claimed 46 World Cup medals including 40 in the IJF World Tour which makes Munkhbat all time topscorer.

In her last year she won the Grand Slams in Tashkent and Tbilisi and took bronze at the World Championships and Olympic Games, in fact one of her best years. She fought more than 300 international contests and we saw her debut at the Junior worlds in Bangkok in 2008.

She fought many matches against Asian opponents such as Jeon Bo-Kyeong (KOR) and her former teammate Otgontsetseg Galbadrakh who fights for Kazakhstan now. Also she fought with many Japanese opponents such as Haruna Asami, Funa Tonaki and Ami Kondo.

At the Olympic Games she won her last contest in judo against Catarina Costa after a career of 16 years. She promised to take the UFC belt soon. In 2010 she was Sambo World Champion 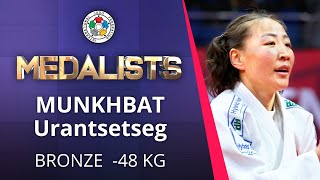 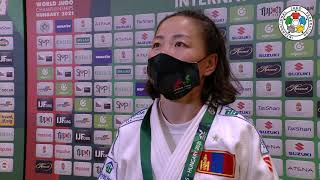 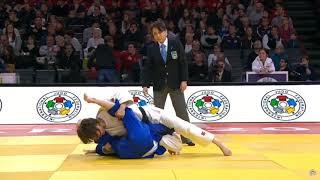