On Tuesday Double World Champion and Olympic bronze medallist Jorge Fonseca was decorated by the President of the Republic with the Order of Merit Infante D. Henrique. For the judoka this award has a very special meaning.

Fonseca: “The order represents the recognition of my country not only for me, but also for my coach, for my club, for judo and its federation and for Portuguese Sport. This award contains in itself all the path I have taken over the years, the intense training, the daily effort, the injuries, the illness, a countless number of difficulties that seemed insurmountable... but also the certainty of what I aspired to, the firm conviction that I would get there, the joy of “reaching the top”, of being a two-time World Champion! And also the happiness of being able to share it with all those who played a decisive role in making this journey possible. All of you are on my mind; and to all of you my thanks. An important part of this award is yours too. And the path continues!”

Jorge Fonseca became double World World Champion in 2021 in Budapest and 2019 in the Budokan in Tokyo. He took bronze at the Tokyo2020 Games. He was born in Sao Tome and Principe (STP) in Africa. He took the European U23 title and 18 medals in the IJF World Tour. He won bronze at Grand Slams in Paris, Düsseldorf and Osaka and was in the finals of the Grand Prix in Zagreb and Agadir but never took a gold medal in the IJF World Judo Tour. So Jorge knows how to peak at its best. He won the Champions League with Sporting Clube Portugal Lisbon in 2018 and 2019. With Portugal he took silver in the mixed team competition. He is obviously Portugal’s first ever judo World Champion and he did it twice. 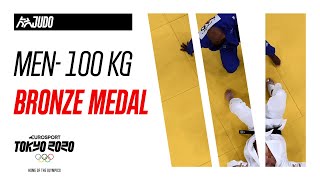 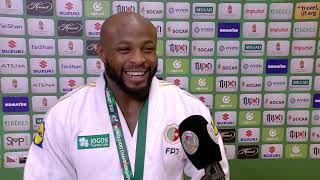 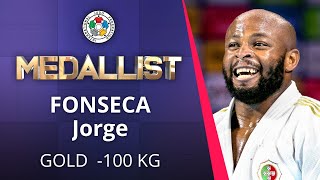