For the first time ever in Korean judo a woman became head coach in Korea. 50 Year old Kim Mi-Jung became Sports director. Kim Mi-Jung: "As a female leader, I'm thinking about managing the Olympic Village in JinCheon for men. I would like to discuss issues such as changes in the body and weight control. Director Kim Mi-Jung is always accompanied by the word "pioneer." She was once a judo star in the nineties and pioneered for Korean Women's Judo in the National Team.

Kim Mi-Jung won the 1991 World title and the 1992 Barcelona Olympic title for the first time in Korean women's history. Then, in 1994, when he was 23, she finally retired after a gold medal at the Asian Games held in Hiroshima.

Kim Mi-Jung said, "At that time, it was natural for female players to quit after graduating from college. Also, I wanted to quit when I was in the best position, so I chose to retire early without any regrets." There were many difficulties because for women. World Champion Kim Byung-Joo, who married a professor at the Korean Air Force Military School at the end of 1994, was selected as the first female coach to represent Korea at the end of 1996. However, when she went to Japan for the tournament, she noticed that she was pregnant due to morning sickness and resigned one month after she was appointed.

However, she continued to play judo while giving birth and raising children. In 2012, he was selected as the coach of the Korean Women's National Team again, and contributed to the good results of the Korean national team (three gold medals, one silver medal, three bronze medals) as a coach at the 2014 Incheon Asian Games. The support of the family also played a major role in Kim Mi-Jung's challenge to become the Korean national team coach this time. "My husband recommended that I lead the Korean women's national team before I get older and lose my passion." "Three children, including the youngest child who will be in the third year of high school next year, said," We don't worry, we'll do it ourselves. Do what your mom wants to do." Kim Mi-Jung's eldest son, Kim Yu-Chul (22), is a 90kg judoka and dreams of participating in the Olympics. 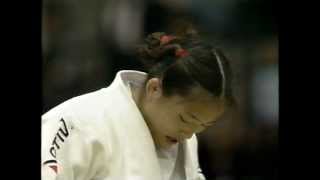