Lasha Shavdatuashvili has won it all, the Olympic title U66kg in 2012, the European title in 2013 and silver last year and he became the fifth man of Georgia to win the World title for his country. Shavdatuashvili defeated Tommy Macias in a tight match with equal chances but in the end both athletes had two penalties and Macias got the third for stepping out of the tatami, or in fact got pushed out of the tatami which meant the world title for Shavdatuashvili. Macias was the first Swedish man to reach the final but Sweden kept without the gold this time.

No matter what would be the outcome of the final, it would be an unexpected new world champion, as the final brought Tommy Macias (SWE) and Lasha Shavdatuashvili (GEO) together on the tatami. After a little less than one minute, Macias was penalised with a first shido for false attack as Shavdatuashvili looked like an impregnable fortress. Before entering the last minute, MACIAS received a second shido, putting Shavdatuashvili in a good position, knowing his tactical skills. It was time for golden score!

After 50 seconds and a last sequence where Macias stepped out of the tatami and was penalised a third time, the victory went to Lasha Shavdatuashvili, who takes his place amid the group of champions who have won the Olympic Games, the continental championships and now the world championships.

Shavdatuashvili, Lasha said, "Judo gives you special moments if you work very hard. I've been chasing this title for so many years. The reason I succeeded today is because I think of judo 24 hours a day. Now that I have the three major titles in the world of judo, I hope that the young generation in Georgia will get inspired by my career and understand that without hard work you can not win."

The first bronze medal contest saw Doha World Judo Masters bronze medallist, Khikmatillokh Turaev (UZB), competing against Bilal Ciloglu (TUR), who so far had no record in 2021. With a waza-ari scored in the last seconds of the match with a sumi-gaeshi Bilal Ciloglu conquered the bronze medal to step on the podium. Bilal Ciloglu looked strong today and became the fifth man of Turkey to collect a bronze medal. Despite his opponent Khikmatillokh Turaev to whom he lost three times, he persisted to win this medal. Many times the former Junior World Champion was close to a medal at senior level but just came short and today he ticked all the boxes for this deserved medal.

Probably disappointed by his loss in the semi-final, Japan’s Hashimoto Soichi faced Hidayat Heydarov (AZE) for the second bronze. After ten competitions without any result, this was the occasion for Heydarov to taste again the metal of a world medal, as he already has four world medals, from juniors and seniors combined. The match started with a false rhythm punctuated by penalties for false attacks, unsuccessful acceleration of Hashimoto and attempts to break Hashimoto's strong kumi-kata by Heydarov. With two shido to each of their names, the two competitors entered the golden score period and it was after 13 seconds that Hashimoto scored ippon to join the other medallists on the podium. Soichi Hashimoto had lots of chances to win the semi final but Macias never gave up and put Hashimoto down into the bronze medal match against Hidayet Heydarov. He is back U73kg and couldn’t give enough power in the category U81kg. Rustam Orujov will go to the Olympic Games and tried U81kg… in fact like Orujov and both never succeeded. Today Heydarov showed he is back at world level and gave it all against Hashimoto. But the Japanese 2017 World Champion kept cool but finished in style and is always prepared to make a fully committed throw and so he did in the golden score against Heydarov and took the bronze medal. After taking silver in 2018, he now collected all three medals.

In this category, a lot of experts would say in the morning that they'd see Hashimoto Soichi (JPN) at least in the final, if not world champion, but this was without counting on the determination of Tommy Macias (SWE). The Swedish athlete is not a newcomer on the circuit. Having already won 2 Grand Slam and 2 Grand Prix golds among his collection of 11 medals on the World Judo Tour, the Swedish competitor has shown incredible consistency over the day, which is not always the case. In 2021, Macias participated in six events and never stepped on the podium, but today was his day and he didn't let it go, especially in the semi-final, where he defeated Hashimoto Soichi, showing prodigious mental strength when he thought he had won, but the referees took off the score and he had to keep competing.

Beside his significant victory against Hashimoto, Macias made his way to the final by winning successively against Nurlan Osmanov (AZE), Victor Scvortov (UAE), Adrian Sulca (ROM) and Khikmatillokh Turaev (UZB).

On the other half of the draw, the whole public was following their local hero, Ungvari Miklos (HUN) and match after match their hope for a new feat from the Olympic and world medallist was growing. Aged 40, Ungvari was looking 20 today, putting all his energy out there on the tatami. He was heroic, especially against Olympic champion, Lasha Shavdatuashvili (GEO), in the quarter-final, where only a small shido made the difference in favour of Shavdatuashvili, who then kept on winning to reach the final.

In the repechage Ungvari lost again after an incredible match against Hidayat Heydarov (AZE). 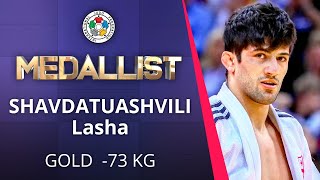 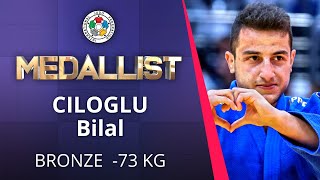 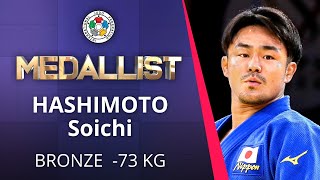