The Japanese delegation came to win a number of gold medals and to confirm their form and expectations. Harasawa Hisayoshi was definitely one of them. Harasawa who had come to Antalya to test himself in the framework of the upcoming Tokyo Games, knowing that he is the holder of team Japan’s spot in the men's heavy weight division. The string winner became Tamerlan Bashaev, much smaller than Harasawa and Bashaev used his fine tuned skills of adaptation to produce one of the most beautiful combinations of the day.

Initiating an ippon-ko-soto-gari, Bashaev didn't change direction and continued to push forward, while Harasawa was attempting the counterattack, but in the process, the Russian was again in the position to throw with his shoulder movement and he did. Suddenly the Japanese judoka was landing on his back. He will have to watch the video to understand exactly what went wrong. This is a beautiful victory for Tamerlan Bashaev.

Under Temur Rakhimov's pressure (TJK) in the quarterfinals, Harasawa got out of trouble thanks to a flash of genius which allowed him to continue his route to the final. One could imagine that he would face Lukas Krpalek (CZE), seeded number one and also world number one, but the latter was eliminated by Tamerlan Bashaev (RUS) in the semi-final.

For the first bronze medal we found Stephan Hegyi (AUT), seventh in Tbilisi a week ago, against Ushangi Kokauri (AZE), third in Abu Dhabi in 2019. After Kokauri was penalised three times, Stephan Hegyi won the medal.

In the second bronze medal contest, the last bout of the whole event, Temur Rakhimov (TJK), still looking for a grand slam medal, was up against the reigning world champion, Lukas Krpalek (CZE). Krpalek scored a first waza-ari with a sumi-gaeshi and not long later he scored again with the exact same movement, a second waza-ari and the win. 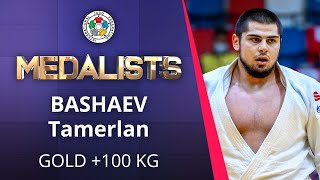 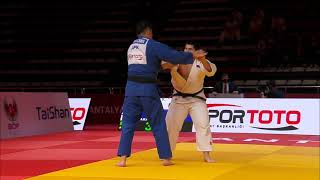 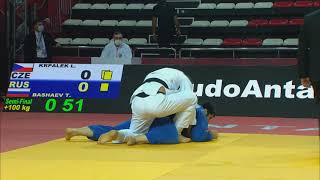