An eagerly awaited gold medal for Hifumi Abe as judo fans around the globe simply had a desire to see Hifumi Abe at his comeback in the IJF World Tour in Antalya, Turkey

The qualification of Abe for the final of the second men's category of the day was not a surprise for anyone. After his Olympic qualification was obtained at the end of 2020 in a single match against his teammate Maruyama Joshiro and especially today, after passing the obstacle of Russia’s Beslan Mudranov (2016 Olympic champion at -60kg) in the first round, Abe negotiated the prelims perfectly to enter this long-awaited final. There he found Alberto Gaitero Martin (ESP), seeded number four in the competition.

We can not say that it was a walk in the park for the double world champion, Abe Hifumi. Pushed into its entrenchments by an in phased, focused Gaitero Martin, Abe was even penalised twice, to come back to meet the Spanish judoka on level terms having dominated the movement early on. Would Gaitero Martin be able to make Abe doubt himself? It is undoubtedly in these moments that the Japanese and Abe even more than another, are the strongest. With a ko-uchi-gari coming from nowhere, Abe finally threw his opponent, after more than two minutes of golden score.

The 2019 European Champion, Orkhan Safarov (AZE) qualified against Murad Chopanov (RUS), 2019 European champion also, but in the u23 age band. Chopanov won his first medal in a Grand Slam with a powerful ura-nage for waza -ari.

A third Frenchman qualified for the final block, Kilian Le Blouch, against Azerbaijan’s Nijat Shikhalizada, finalist in the Baku Grand Slam in 2019. The latter produced one of the most spectacular movements of the final block, with a superb ashi-waza that made Le Blouch literally fly for ippon. 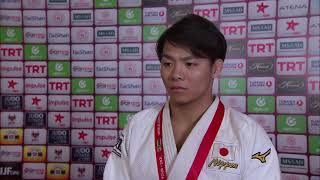 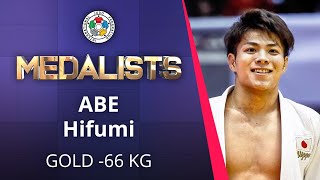 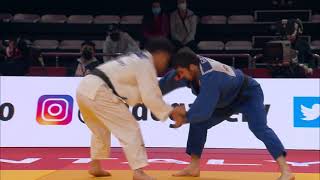 10 May 2019 14:40
Spanish lightweights inspired by competition in Baku