British judo star Sally Conway won her third Grand Prix gold medal after Hohhot Grand Prix winner and home favourite Sanne Van Dijke (NED) could not participate in the U70kg final after picking up an elbow injury earlier in the semi final. Olympic bronze medallist Conway will now break back into the world’s top 10 and move closer to the Dutch judoka who started the day ranked fifth in the world.

In the first semi-final Conway threw World Judo Masters gold medallist Maria Portela (BRA) with a makikomi with six seconds left on the clock for ippon. In the second semi-final Van Dijke saw off World Judo Masters bronze medallist Anna Bernholm (SWE) with the only score of the contest. The Dutch ace lifted up her Swedish rival with a ura-nage for a waza-ari score and that was the difference after four minutes of judo.

The first bronze medal was awarded to Cancun Grand Prix silver medallist Gabriella Willems (BEL) who narrowly defeated Bernholm. Belgian youngster Willems caught the Swede with a ko-soto-gake for a waza-ari score which settled the contest after four minutes.

The second bronze medal was won by Abu Dhabi Grand Slam silver medallist Miriam Butkereit (GER) who beat former world number one Portela by a waza-ari score. Butkereit won her second Grand Prix medal courtesy of a sumi-gaeshi to register a major scalp over the number one seed who struggled with the height and frame of her German opponent. 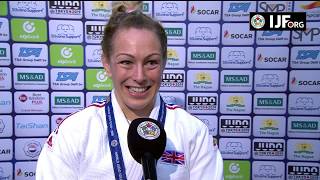 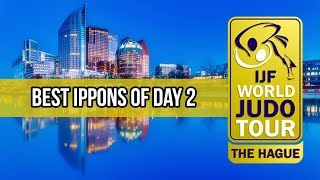 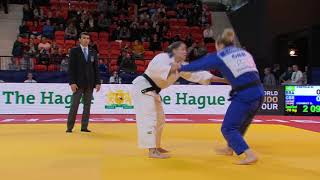