Double world bronze medallist Tashiro Miku put her disappointment of being left out of her country’s team for the Suzuki World Championships 2017 by confirming her place as not only Japan’s number one judoka at U63kg but also as one of the top judoka at this weight in the world.

Hohhot Grand Prix winner Tashiro won her first Grand Slam gold medal at an important time, as a younger generation have been a rich source of medals for Japan since Rio 2016. Asian Championships winner Nabekura Nami (JPN) fell behind to a waza-ari score and Tashiro showed her contest management skills by wisely engaging her younger opponent in ne-waza to use up vital seconds. The first-time Grand Slam victor was one of the most popular of Japan’s seven winners on day one and looks poised to return to the World Championships stage in 2018.

In the first semi-final Olympic champion and European champion Tina Trstenjak (SLO) tumbled to Tashiro who took the lead with a o-uchi-gari and followed up with a yoko-shiho-gatame hold for ippon. In the second semi-final Nabekura trapped The Hague Grand Prix winner Juul Franssen (NED) on the ground for ippon.

In the first bronze medal contest 2012 Tokyo Grand Slam winner Tsugane Megumi (JPN) produced the only score of her content with Franssen as a waza-ari was the difference after four minutes. 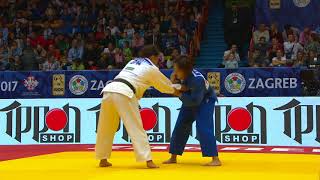 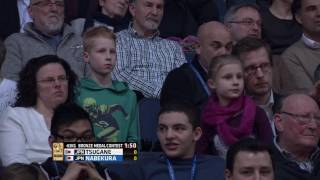 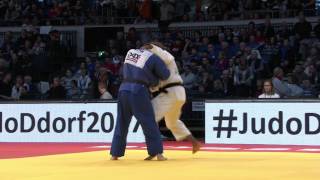