The Netherlands’ charismatic heavyweight Roy Meyer (NED) was the main man for the hosts as he turned in the best result from their men’s team. The 26-year-old World Judo Masters bronze medallist showed his power and his personality as he beat Abu Dhabi Grand Slam silver medallist Maciej Sarnacki (POL) in the last contest of The Hague Grand Prix 2017.

Meyer went underneath for a seoi-nage but Sarnacki rotated off the attack in a signal of intent from the Dutchman before he took the lead with a ko-uchi-gari for a waza-ari score. In a tough match both judoka had two shidos next to their names in the closing moments as Meyer lived dangerously despite his lead but was able to stay active to see the Netherlands home with a fifth gold medal. Meyer and Sarnacki put their arms around each other and turned to the fans in a showing of mutual respect and appreciation for the supporters.

In the first semi-final Sarnacki saw off three-time Grand Prix medallist Daniel Allerstorfer (AUT) by a waza-ari which score which came from a polished sasae-tsurikomi-ashi technique. In the second semi-final Meyer held down Antalya Grand Prix bronze medallist Musa Tumenov (RUS) for ippon to make sure that he would be on the medal podium at home. Meyer failed with a seoi-nage but cleverly turned over his opponent and overpowered him for 20 seconds to ignite the crowd.

The first bronze medal was won by two-time Grand Prix medallist Soslan Bostanov (RUS) who took over his countryman with ashi-waza and held him down for 20 seconds for ippon. A third Grand Prix medal for Bostanov kept Russia’s medal column ticking over and all but assured the 34-year-old veteran more run outs in 2018.

The second bronze medal went to former Moscow Grand Slam winner Javad Mahjoub (IRI) who racked up three scores against Allerstorfer on his heavyweight debut. Mahjoub looks a new man at the heavier weight and came in at 117kg which suited him as he threw the heavier man twice with a seoi-nage for waza-ari scores having already led by one waza-ari. 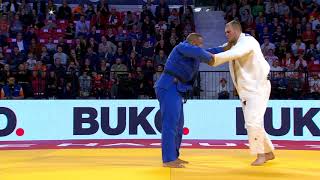 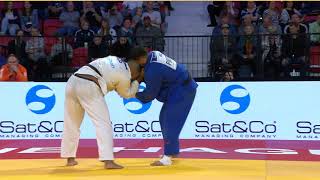 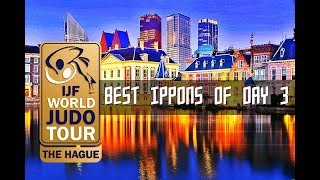