Who would have expected Portugal to lead the medal table after Day 1 of the European Open in Minsk? In fact, the Portuguese celebrated two gold medals. A medal for Telma Monteiro was penciled in, but the surprise victory for Maria Siderot brought Portugal the first gold of the day.

Maria Siderot took the gold U48kg at the European Open in Minsk. The 21-year-old already proved her worth with top judo since her fifth place finishes in Tbilisi and Antalya this year and the bronze medal in Bucharest. On Saturday she had a tough opponent in World no. 5 Milica Nikolic of Serbia, but it was Siderot (WRL 26) who surprised Nikolic one minute before the end with a reverse seoi nage. Joana Diogo added a second medal for Portugal, both coached by Ana Hormigo, who was the highest ever seeded athlete U48kg in the past. However, Siderot will take a small step with 100 points.

The story of the day was the gold medal for Telma Monteiro. She was convincing, relaxed, and effective, especially in her groundwork. The last time that Portugal won three medals in one day on European soil was in Lisbon in 2014, but two gold medals in one day was achieved for the last time in 2009 in Lisbon. For Monteiro it was a welcome feeling to “give the body some challenge” after a long period after the Olympic Games and a shoulder surgery.

Darya Skypnik wrote another story with a prolongation of her title in 2015. In Minsk she was again the best, which came as a suprise against the talented Larisa Florian, World no. 6. Skrypnik, who won World bronze in 2015, was determined to show her best in Minsk as preparation for the World Championships. It may be her last edition, but this gold medal might motivate her to continue in the World Tour.

There was Polish gold for Agata Ozdoba (WRL 62), while Karolina Talach (WRL 41) finished with empty hands. Ozdoba defeated Inbal Shemesh of Israel, who impressed with good judo. She is coached by 2004 Olympic Champion Yvonne Boenisch, who works with a strong and young team. Israel has Gerbi, Shor, and Snir in this category and Shemesh made it clear she belongs among that talented group. Ozdoba, who is World Military Champion, collected her first gold medal in a World Cup ever. There was bronze for Daniela Kazanoi of Belarus, who won European Championship medals in each age category, but this senior European Open was precious.

In the men’s division, Hidayet Heydarov of Azerbaijan showed once again his good form and candidacy for a World Championships medal. Heydarov was by far the best in a strong field of 58 participants. Oleg Babgoev was one of the 39 Russian men in Minsk, all of who entered at club level. Heydarov is the only man ever to win four different European titles in four different age levels. A World medal is the next target for 19-year young Heydarov.

Turkish Bekir Ozlu won gold U60kg, coached by Irakli Uznadze, who was his coach for Georgia in 2012. Ozlu was smart today and bested Joaquin Gomis of Spain, who also had a great day, but couldn’t finish the show. Ozlu defeated him once before in 2015 and took the title.

Nijat Shikhalizada won the first of two gold medals for Azerbaijan. The 28-year old world-class athlete defeated Te Artur of Kyrgystan, a surprising athlete who has performed well and put Kyrgystan on the map. Shikhalizada won his 15th World Cup medal and sixth title. Shikhalizada defeated Dzmitry Minkou in the semi-final, a key match. Minkou won the bronze for his home crowd with refreshing judo.

On Sunday there will be more action with some exciting matches from the start. 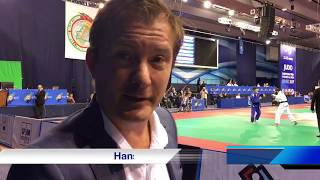