The category U63kg is a European division with Olympic Champion Tina Trstenjak who is always in for a battle with her rivals Agbegnenou, Unterwurzacher, Trajdos, and Schlesinger. Even though Olympic medallists Yarden Gerbi (ISR) and Anicka van Emden (NED) either won’t compete or retired, the competition is quite severe and there are lots of women with good confidence that they can be a showcase at this event.

In Rio, Tina Trstenjak of Slovenia followed up Urska Zolnir’s 2012 Olympic champion performance. Tina won the World title in 2015 in Astana and World bronze in 2014. She is 2016 European Judo champion and continued with the Grand Slam victory in Paris in 2017.

French Clarisse Agbegnenou is the 2014 World Champion and runner-up in 2013 and 2015 in Astana. She won Olympic silver in Rio 2016, losing to Trstenjak. Agbegnenou is a double European Champion in 2013 and 2014 and was number one of the world U63kg. Agbegnenou took silver in Paris in 2017, again behind Trstenjak, and is eager for revenge. In 2017 she won the Grand Prix Düsseldorf 2017 for the third time where Trstenjak won bronze, so everything is possible.

Fourth seed Alice Schlesinger took gold at the Grand Slam in Baku in 2017. After she switched from Israel to Great Britain, she came back strong with victories in Dusseldorf 2015 and Grand Slam Baku in 2016 and 2017.

Always dangerous is Maryna Trajdos. Although we tried to stick with a top four favourites, we should count her in. Seeded as fifth, she likely cause everyone she faces trouble and she has shown to be highly capable by taking gold at the European Games in 2015.

With Margaux Pinot of France, Andreja Leski (SLO)--who is in a good shape--and Edwige Gwend (ITA) as last seeded this championship can be very interesting. For sure is will be the most competitive category for women. Bazynski, Krssakova, Livesey and super talent Sanne Vermeer are a few names who can upset the elite. Let’s see if there’s something left for them. 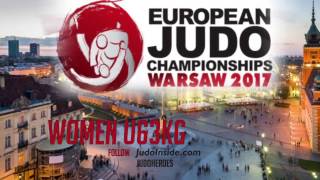 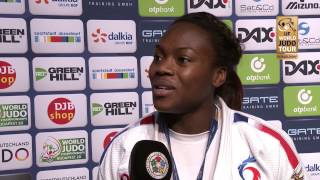 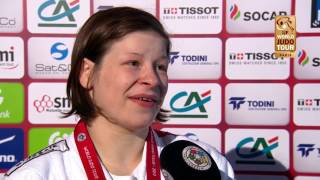