On Sunday the Brazilian team was able to add a few other gold medals at the Pan American Open in Santiago de Chile. In the men’s division Brazil took three titles, exception was the gold for American judoka Jack Hatton.

Hatton won the category U81kg in the final against Olivier Gobeil St-Amand. The category U81kg was had the most judoka of all categories, but still just 18 in a total field of 123 athletes in Santiago. Hatton had to fight four matches and has a successful Pan American tour. Last week he won gold in Buenos Aires. The 21-year old fighter is the alternative for Olympic runner-up Travis Stevens. Eduardo Bettoni of Brazil won gold U90kg against Canadian Louis Krieber Gagnon. 34-year old Luciano Correa snatched the gold medal U100kg and was obviously the oldest winner in Santiago. The former World champion defeated Canadian Marc Deschenes who again had to be satisfied with a silver medal, just like last week in Buenos Aires. Last week’s winner Thomas Briceno of Chile won bronze this time as well as his compatriot Italo Cordova.

Heavyweight Ruan Isquierdo won the final against Argentine judoka Hector Campos in a field of five and took the third male Brazilian title.

Canadian Kelita Zupancic won the title for women U70kg in Santiago with Nicole Stout as runner-up like last week. Zupancic took a silver medal in Oberwart and Paris, both in February. Host nation Chile took the title U78kg. In her final combat, Zupancic scored a waza-ari and an ippon in just over a minute, beating out American Nicole Stout and claiming the gold medal. “You never know which way a fight is going to go, so the faster, the better!” declared Zupancic, who relied on her recent training during today’s combats. “My new gripping strategies and techniques are working so far,” she affirmed.

Jacqueline Usnayo (28) captured her second big international title and defended last year’s title successfully. Chile added another title for Josefina Fuentealba was this weekend’s youngest winner and the youngest ever winner at Pan American Open’s held since 2013. A good weekend for Chile, but for sure for Brazil with eight medals in total. 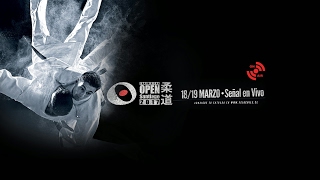