Rio 2016 Olympic silver medallist Elmar Gasimov (AZE) showed that he is in peak physical condition and is ready for domestic and international opposition on Sunday. The 26-year-old’s Rio result was wildly celebrated by all including former world champion Elkhan Mammadov (AZE) who was right behind his teammate despite losing to Gasimov in his question for Olympic selection.

Both Azeri stars will be imposing forces in their category U100kg at home as judoka such as Dusseldorf Grand Prix bronze medallist Michael Korrel (NED) and Dusseldorf winner Toma Nikiforov (BEL) will be gunning for glory. This category can be highly interesting.

Paris Grand Slam bronze medallist Orkhan Safarov (AZE) is the judoka to beat in the men’s lightest weight category on Friday. World number two Safarov, 25, is one of the faces of the Azerbaijan men’s team and could provide the perfect start for hosts on day one if he can repeat his 2014 home victory. Dusseldorf Grand Prix bronze medallist Dashdavaa Amartuvshin (MGL) will relish the home advantage for the top seed and the pressure on Safarov while world number 29 and world bronze medallist Shishime Toru (JPN) will certainly outperform his modest world ranking.

Paris Grand Slam bronze medallist Nijat Shikhalizada (AZE) will be the centre of attention in the -66kg category on day one in his native land. Rio 2016 Olympian Shikhalizada, 29, has won all three colours of Baku Grand Slam hardware and starts as the top seed. Dusseldorf Grand Prix bronze medallist Tal Flicker (ISR) finished seventh in Baku in 2016 and should be a different proposition this year having placed in his last five events. Zagreb Grand Prix silver medallist Baruch Shmailov (ISR) doubles up his country’s medal pursuit at -66kg having finished fifth in Dusseldorf while world number 21 and four-time Grand Slam winner Takajo Tomofumi (JPN) will be on everyone’s radar.

Another Azeri clash can be Rustam Orujov vs Hidayet Heydarov. Rio 2016 Olympic silver medallist Orujov will still be smarting from his Paris Grand Slam defeat at the hands of young contender Heydarov for bronze in France in February when he takes to the tatami in Baku. World number one Orujov, who only lost to Ono Shohei at the Olympics last year, was tormented by 19-year-old Heydarov in France as he lost by a waza-ari from a seoi-nage in golden score. Both judoka will fight in Baku with more than national pride at stake while double Olympic medallist Lasha Shavdatuashvili (GEO) and double world champion Nakaya Riki (JPN) could stand above the Azeri aces on the podium on Saturday evening.

Dusseldorf Grand Prix bronze medallist Ivaylo Ivanov (BUL) is chasing a second Grand Slam career win on Saturday. The world number two is the highest ranked -81kg judoka in Baku and will be challenged all the way by Paris Grand Slam winner Frank De Wit (NED) who was humbled in the first round in Dusseldorf. De Wit, 21, lost by three waza-ari having not conceded a single score in his five contests in Paris and the Dutchman will need to show his character to bounce back in Baku. Dusseldorf Grand Prix bronze medallist Dorin Gotonoaga (MDA) is one of Moldova’s new crop of youngsters and will now be studied in-depth by the top seeds.

Double Olympic bronze medallist Rafael Silva (BRA) bids to follow up on his Paris Grand Slam bronze with another podium appearance in Azerbaijan. Man-mountain Silva, 29, finished a lowly seventh in Baku last year and as the number one seed will settle for nothing less than a medal-winning display this time around. Dusseldorf Grand Prix bronze medallist Bor Barna (HUN) showed middleweight conditioning as he won his fourth contest in Germany two weeks ago in the fifth minute of golden score and makes an immediate return to IJF World Judo Tour duty. Five-time Grand Slam medallist Roy Meyer (NED) has never won one of the IJF’s five showpiece Grand Slams but could have a serious crack on Sunday if he can keep some energy in reserve during the preliminary rounds. 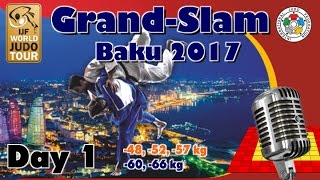