It was an exciting day of judo at the Carioca 2 Arena in Rio. With the men U73kg and women U57kg on show, there were absolute top matches in the quarter finals and the semis. The quarter finals were decisive again with a surprising line up in pool A. Lightweight Dirk van Tichelt had beaten 2015 World bronze medallist An Chang-Rim of Korea. The Belgian judoka created a nice path to the semi final once he had outsmarted Denis Iartcev with fine judo and Van Tichelt seems to be in the form of his life.

Dirk is back to Rio where he booked great successes winning bronze at the World Championships in 2013. Unfortunately, he lost in the semi final against... Shohei Ono. In 2009, Van Tichelt won the Grand Slam and took bronze in 2010. He will meet again with Shohei Ono of Japan, the absolute favourite. No one can stop Ono today, not even Lasha Shavdatuashvili, the Olympic Champion U66kg in 2012. Ono beat him by waza-ari in the first 30 seconds of the match and that was enough. Rustam Orujov of Azerbaijan is another strong fighter. He had the best draw and defeated Khamza, Bensted and Miklos Ungvari in the quarter final.

Israeli Sagi Muki was the ace for the nation that lost two medal chances on Sunday’s first round. 2015 European champion Muki was able to overcome 2013 European champion Rok Draksic and Germany’s Igor Wandtke. In the quarterfinal Nick Delpopolo of the USA waited for him and Muki proceeded into the semi final. All in all a reasonable performance by Muki by the books, but the loss of An Chang-rim was the sensation of the lightweights, created by Van Tichelt. 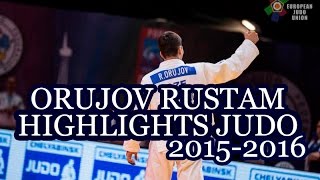