TWOJ, the world of Judo, by Matt Carter

Day 4 of the 2000 Junior World Judo Championships in Nabeul in Tunisia saw the final three categories battle it out on the mats. Competing for gold were the female heavyweights in the +78kg category and the two lightest categories for men: -60kg and -66kg. These last two were also the largest with 46 competitors in each weight class.

+78kg
Starting with the female heavyweights, Japan claimed their second gold of the tournament to finish at the top of the medal standings with a total of 10 medals. And it was Maki Tsukada who picked up their tenth one. Tsukada made it to the final with 4 straight ippon victories over players from Turkey, Germany, Brazil and Ukraine. Apparently an ashi-waza specialist, she scored ippon with Ko-soto-gari and O-uchi-gari on her way to gold. Her most difficult challenge came in the semi-finals where she faced a tough opponent in Marina Prokofyieva (UKR). The Ukrainian appeared to be in control of the match as she caused Tsukada to receive a shido for failing to get out of the red area in time, Prokofyieva then followed this up with a quick yuko score to temporarily take the lead. But the Japanese girl was patient and soon after countered her beautifully with an O-uchi-gari to score ippon and a spot in the finals. In the finals she met Marie Elis Veys of Belgium who had clawed her way to the final with wins over Poland and the USA and then Wen Tong of China in the semi-finals. In the final, Veys scored first with a driving Seoi-nage that powered Tsukada over for a koka. However, that was the only score she would get, as Tsukada blocked everything that came her way - receiving a shido in the process. But then the flow of the match changed and Vey, who had injured her leg, went on the defensive to try and protect her lead. Unable to fight on, she received shido, chui, keikoku and finally hansokumake to hand Tsukada the title.

Earlier in the day, Insaf Yahyaoui of Tunisia performed admirably, making it as far as the bronze medal final. In the final against Wen Tong (CHN), she failed to deliver a medal to the many cheering Tunisians in the crowd and was caught for an ippon with a big Harai-maki-komi in the first 15 seconds. In was a disappointing finish to a very good day for Yahyaoui and she was devastated by the result, but on reflection it was a solid 5th place finish for her and she made her country proud. On the other side of the table, Prokofyieva beat Magdale Koziol (POL) whom she held down with Kesa-gatame for ippon for a bronze medal.

-60kg
-60kg was a huge category and we were treated to a plethora of judo techniques starting with an excellent Ura-nage from Kwang Sub Kim (KOR) against France's Laurent Bernard in the very first match. Kim went on to win a bronze medal after beating Sergiy Morokhvets (UKR). The second bronze medal was awarded to Spianiard, Javier Fernandez after he threw Argentina's Miguel Albarracin for ippon.

The highlight of the weight class however, was the final featuring two fighters who had looked sharp all day long; Ludwig Paischer (AUT) and Joao Nunes (BRA). Paischer had a lot of success throughout the day with a number of Sutemi-waza throws and had an excellent transition into ground work. In the semi-finals against Morokhvets he performed a stunning roll into a Jikoku-jime which looked certain to strangle the Ukranian unconscious -- he actually had to do a double-take at his opponents face when the choke failed to cause a submission, never-the-less he won the match and went on to the final. In the final he faced the equally talented Brazilian. Nunes won half of his matches with big ippon throws, but saved his best for last. With perfect timing he scored a beautiful classic Tai-otoshi against Paischer to win Brazil's second gold medal of the championships. -66kg

-66kg
Any one in attendance today would be hard pressed to say which of the men's categories was more exciting as the -66kg class also produced some fine judo. The star of the day however, was Renat Mirzaliyez (UKR) who not only won the category, but also received the IJF Ippon Trophy, which was presented to the male and female athlete who scored the most ippons in the shortest amount of time throughout the tournament.

Mirzaliyez made his way to the final by winning 4 of his 5 matches by ippon. His opening bout was against Dimitris Moros (GRE) and he picked up the Greek with a Te-guruma to score the perfect score. In his second fight he faced a tough Korean player, Won Hee Lee, and although he failed to score ippon, he made a swift move to counter the Korean with a nice Tani-otoshi. Advancing to the quarter-finals, he finished off bronze medallist, Tomasz Adamiec of Poland with a quick ippon and then in the semis, dumped Moacir Mendes of Brazil with a beautiful Harai-goshi. This put him in the final against Arash Miresmaeili of Iran. The Iranian had had a pretty impressive day himself and had triumphed over Frenchman, Christophe Besnard in a semi-final match that saw both fighters penalised up to chui for failing to attack each other in a gripping battle. Throughout the championships, referees had been strict in handing out penalties for passivity -- particularly in the finals -- in an effort to have the players produce more throws. Miresmaeili came close to throwing Besnard with a solid Uchi-mata attempt towards the end of the match and this was enough to sway all three judges in his favour when the decision came after the four minute draw. He also defeated a tough Portuguese player named Joao Pina in the quarter-finals, as well as players from Australia and Cuba prior to that.

The final itself was an entertaining one. Mirzaliyez opened the scoring with Ko-soto-gari for waza-ari, followed soon after by a Kata-guruma attempt in which he just couldn't get the Iranian up high enough to complete the technique. He didn't fail on his second attempt though and scored his fourth ippon of the day with the same "fireman's carry" Kata-guruma. After the match he preformed a handspring and a quick back flip, further demonstrating his obvious athletic ability. As mentioned, the first bronze medal went to Adamiec of Poland, while Mendes of Brazil won the other bronze. Mendes won over a very talented Austrian, Andrea Mitterfellner who fought his way through the repechage to get to the third place final.

Once the medal presentations were over, a special ceremony took place to award the IJF Ippon Trophy and the prestigious Best Judoka Award. The female recipient of the Ippon Trophy was Russia's Natalia Pissareva who took gold in the women's -70kg category on Day 3. Ukrainian -66kg champion, Mirzaliyez came off the podium and over to the centre of the arena to claim his Ippon Trophy. The award, which is sponsored by Mizuno, also included a brand new judogi for each winner. The Best Judoka Award was voted on by the coaches of the competing nations and was given to the male and female players deemed to have been the best overall players in the championships. The male award went out to a smiling, Masahiro Takamatsu of Japan, who had won the men's -73kg title the previous day,. The women's award was given to Cuban -57kg champion, Yurisleidis Lupetey. 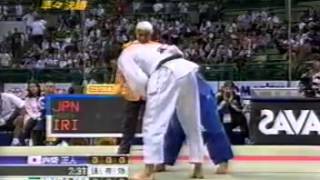 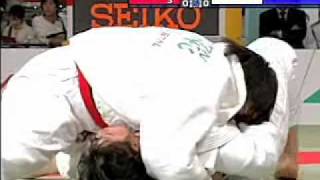 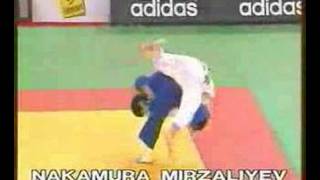